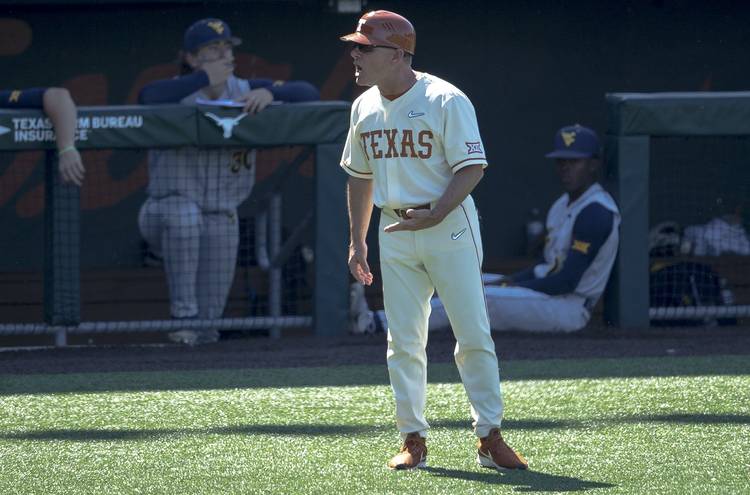 Texas let another late lead slip away at UFCU Disch-Falk Field on Saturday in a crushing loss to West Virginia.

Home runs by Masen Hibbeler and Zach Zubia in the fifth inning helped UT tie the game after it surrendered five unearned runs. West Virginia bunted in a go-ahead run in the sixth inning. A two-run double by Ryan Reynolds was then the highlight of UT’s three-run seventh inning.

West Virginia, however, chipped away at its deficit with one run in the eighth inning. The 17th-ranked Mountaineers (26-14; 10-7 Big 12) then rallied past the Longhorns in their final at-bat with a RBI double and another run-scoring bunt.

Texas (24-21; 5-11) advanced two runners into scoring position with one out in the ninth inning but was unable to change the afternoon’s outcome. The loss was UT’s sixth straight.

SEE YA, ⚾️! @masenhibbeler HOMERS TO LEFT TO LEAD OFF THE 5TH! #HookEm pic.twitter.com/9pwOg6Uj5f

After Hibbeler and Zubia went deep in the fifth inning, Texas claimed what was only its third multi-homer game of the season. Zubia had one of UT’s two homers against UTSA on Feb. 27. The Longhorns hit a season-high three home runs in a 13-6 rout of Purdue on Feb. 23.

NOTABLE NUMBER: 8. Since West Virginia went with the left-handed Jackson Mound on the mound, Texas stenciled eight right-handed bats into its starting line-up. In order to achieve that right-handed look, Texas went to its bench and gave Peter Geib his first-ever start in the field and Bryce Reagan his second start at second base. Normally the designated hitter, Zach Zubia moved to first base. Freshman Caston Peter also returned from a finger injury and went 0-for-2 as UT’s starting designated hitter.

After West Virginia went to its bullpen, Geib, Reagan and Peter were all eventually substituted out of the game.