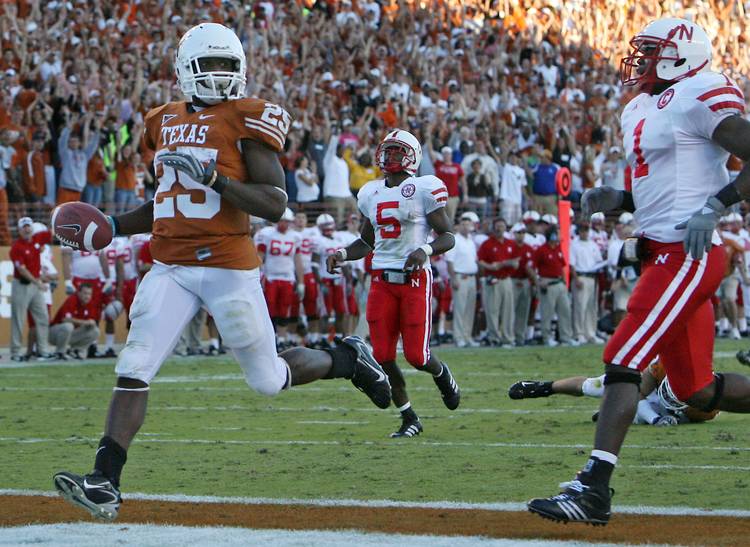 Texas running back Jamaal Charles scores against Nebraska at Royal-Memorial Stadium on Oct. 27, 2007. Charles rushed for 296 yards and three fourth-quarter touchdowns in the 28-25 win. (Ralph Barrera/AMERICAN-STATESMAN)

Nearly 14 years after he first touched a football at Texas, Jamaal Charles has decided to call it a career.

Charles officially retired after signing a one-day contract with the Kansas City Chiefs on Wednesday. The running back’s retirement comes during an offseason that has seen former Longhorns Brian Orakpo and Brian Robison also step away from the game.

A third-round pick in the 2008 NFL Draft, Charles’ 7,260 rushing yards from 2008-16 is a franchise record for the Chiefs. (Ex-Longhorn Priest Holmes ranks second among Kansas City runners with 6,070 yards). While a Chief, Charles scored 63 times, averaged 5.5 yards per carry and 8.6 yards per catch and reached four Pro Bowls.

Charles appeared in 16 games with Denver and Jacksonville over the past two seasons.

Charles was a four-star running back from Port Arthur Memorial when he signed with UT in 2005. Only Ricky Williams, Cedric Benson and Earl Campbell ran for more yards at Texas than Charles, who turned 533 carries into 3,328 yards and 36 touchdowns. Thirty-four of Charles’ yards were recorded during UT’s win over USC in the 2006 Rose Bowl.

Texas RBs in the NFL