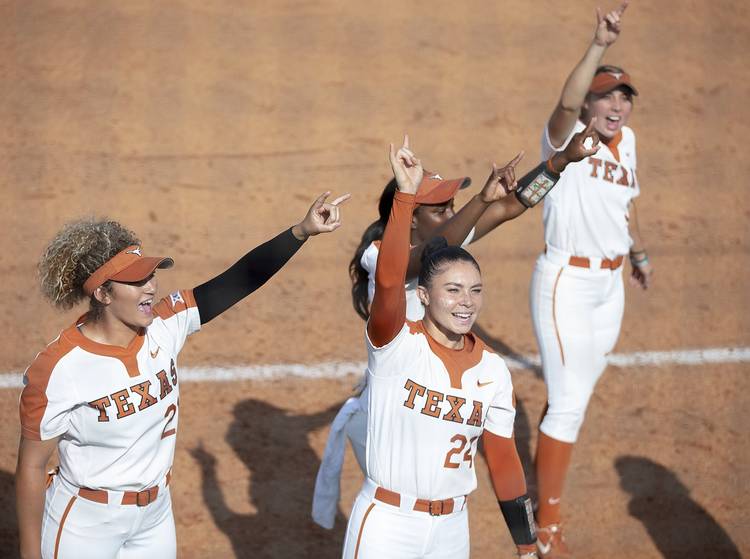 Texas players leads the "Texas Fight" cheer with fans during an Austin Regional game against Houston on on May 19, 2019 in Austin. [NICK WAGNER/AMERICAN-STATESMAN]

A 5-2 victory by Texas on Sunday afternoon set up a high-stakes meeting between the Longhorns and Houston in the NCAA tournament.

The Longhorns and Cougars stuck around McCombs Field for a winner-take-all game on Sunday evening. The winner will advance to the Alabama super regional.

Houston (39-18), which hadn’t trailed in either of its first two games at the Austin regional, grabbed an early lead in Sunday’s first game. Maya Thomas ld off the second inning with a soft double that a diving Kaitlyn Washington couldn’t grab in left field. Thomas scooted to third on a wild pitch before Miranda Elish surrendered a single to opposing pitcher Savannah Heebner.

The Cougars’ first deficit of the tournament would come, though.

Texas, which was averaging 2.9 runs in the 14 games since the Longhorns beat Houston 5-0 on April 10, scored five times in the third inning. Lauren Burke and Shannon Rhodes drove in three runs with singles off Heebner. UT also scored on Washington’s deep fly-out and a passed ball.

In the five-run frame, Texas (44-15) amped up its aggressiveness on the base paths. Ki’Audra Hayter led off the inning with a bunt single and later scored from second base on Burke’s routine single. Janae Jefferson legged out an infield single thanks to a headfirst slide into the base. Burke beat Houston catcher Brooke Vannoy to the plate on the bases-loaded passed ball.

Given a four-run cushion, Elish led the Longhorns the rest of the way. One day after throwing 229 pitches in two wins over Texas A&M and Sam Houston State, she threw 106 against Houston. She gave up eight hits and didn’t walk a batter for the second straight game.

Houston got two runners aboard in the seventh, but Heebner grounded out to Jefferson at second base to end the game. Ten Cougars were stranded in the loss.

Dating back to UT’s tournament-opening loss to Sam Houston State, Elish has pitched the last 23 innings for Texas. Over those 23 innings, the all-conference honoree has thrown 346 pitches.