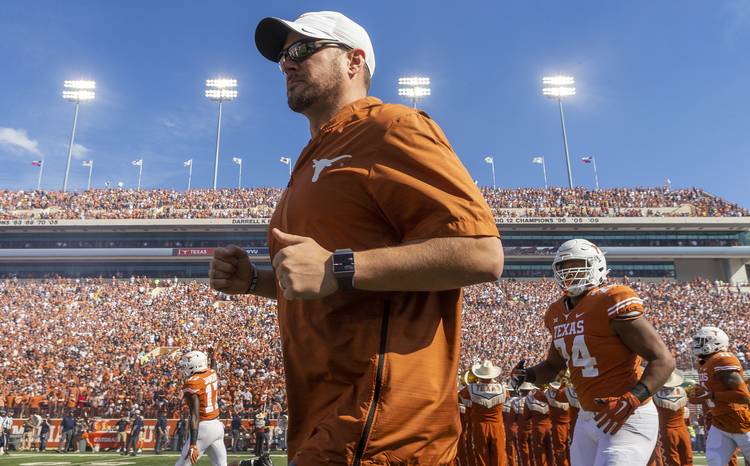 Texas President Gregory L. Fenves said coach Tom Herman’s two-year contract extension sends a message that the school is committed to him as the leader of UT football both now and going forward.

The UT System Board of Regents approved Herman’s extension Thursday morning as part of the consent agenda items. All multi-year contracts at UT must be approved by the regents.

“The message we want to send to our head coach, to the players on the team, to the recruits and Longhorn Nation is that we’re committed to Tom Herman as the head coach of Longhorn football,” Fenves told the American-Statesman.

“I think coach Herman has shown that he’s built a platform and strong program that’s a base for future progress,” he added. “We’re all very excited about where he’s taking the program.”

Herman inherited a program that endured three straight losing seasons. In 2017, Texas went 7-6 and reached a bowl game for the first time since 2014. Last season, the Longhorns went 10-4, reached the Big 12 championship and demolished then-No. 5 Georgia in the Sugar Bowl. This fall, Texas is projected to be among the top-15 teams in the preseason Associated Press Top 25.

In a statement, Herman said he was grateful to UT administrators “for all the support they provide me, my family and our football program.”

“I truly love being the head football coach at Texas,” Herman said in the statement. “We’ve done some good things, but have so much more we are preparing to accomplish. I’m excited for the future.”

Athletic director Chris Del Conte, who pushed for the extension, told the Statesman that Herman is building something special and “we couldn’t be more excited about his leadership of our football program.”

“There have been many great accomplishments and the culture he is establishing is one that focuses on maximizing the student-athletes on the field and developing them as young men, in the classroom and our community off the field,” Del Conte said. “We are lucky to have him and thrilled to be extending his contract. The future of Texas Football is in great hands.”

“Chris Del Conte and I are always looking at our commitments to our coaches, and it’s always an ongoing process and it never stops,” Fenves said.

The school has shown a great commitment to the football program already.

Bevo Boulevard and the Longhorn City Limits’ pregame concerts were smashing successes last fall. Texas just started the demolition of the south end zone of Royal-Memorial Stadium as part of a $175-million renovation project. Athletics was responsible for $125 million of the total, and it’s possible that most will be accounted for when the season begins.

“It’s all thanks to Chris Del Conte,” Fenves said. “He came up with this brilliant concept addressing the long history of how do we finish Royal-Memorial, how do we finish off the south end zone. In the short time he’s been here, he very quickly put together a very ambitious, visionary, doable and practical plan for the south end zone to not only improve the fan experience but to improve the football facilities for the football program, which are critically important.”

Yuya Ito bows out in round of 16 at NCAA Championship