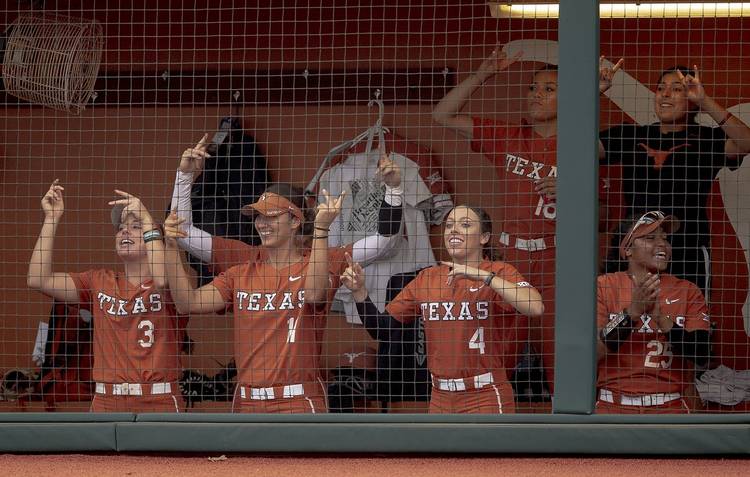 Texas players cheer after a teammate reached base safely against Texas A&M on May 18, 2019 in Austin. [NICK WAGNER/AMERICAN-STATESMAN]

TUSCALOOSA, Ala. — Texas kept its season alive with a wild rally at Rhoads Stadium in the second game of a super regional on Friday night.

The Longhorns trailed 4-0 after the second inning, but the team’s biggest concern was the status of star pitcher Miranda Elish. With one out in the top of the second, Elish was hit in the face by a throw from catcher Mary Iakopo. Elish left the game and was taken to a local hospital as a precautionary measure.

Texas hadn’t overcome anything greater than a two-run deficit in any of its 45 previous wins, but Texas stormed back on a clear night in Alabama. Iakopo’s team-leading 11th homer was a three-run blast in the third inning. One inning later, MK Tedder’s home run led off a four-run outburst by the UT offense.

Freshman pitcher Shea O’Leary closed out the comeback with a solid performance in the circle. O’Leary allowed two hits, one walk and one run in relief of Elish, and she struck out four batters. O’Leary entered the game as the NCAA’s leader in ERA but she had pitched only once in the NCAA tournament.

AND WE ARE TIED UP!

A sophomore, Tedder tied the game in a fourth inning that Texas would score three more runs in. The homer was the fourth of Tedder’s collegiate career. Tedder grew up in nearby Hoover and had plenty of family and friends in the stands at Rhoads Stadium.

NOTABLE NUMBER: 7. The seven runs scored by Texas over the third and fourth innings continued a trend for the UT offense. After UT ended her team’s season last week in the Austin regional, Houston coach Kristin Vesely opined that “If you look at their success probably in the last 20 games, they rely heavily on big innings.”

Vesely’s assessment of the Texas offense was correct. In its 20 games ahead of the super regionals, Texas was held scoreless in 106 of the 136 innings it batted in. In 16 of the 30 innings that Texas wasn’t kept off the scoreboard, the Longhorns scored at least twice and accounted for 77.8 percent of those games’ 63 runs.

UP NEXT: Texas (46-16) and Alabama (56-8) will battle for a spot in the Women’s College World Series on Saturday afternoon. ESPN will broadcast the third game of the Tuscaloosa super regional, which will begin at 1 p.m.