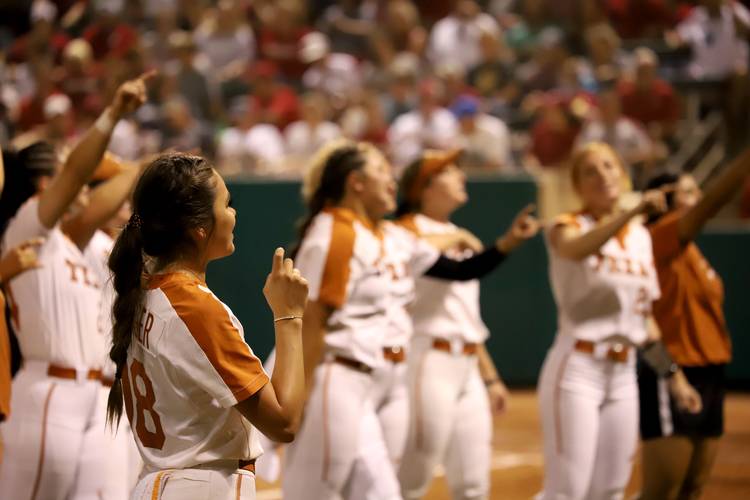 Texas players encourage their fans during a 7-5 win over Alabama at Rhoads Stadium in Tuscaloosa, Ala., on May 24, 2019. (Karley Fernandez/for Tuscaloosa News)

TUSCALOOSA, Ala. — Texas was unable to secure a trip to the Women’s College World Series as Alabama thwarted an attempted comeback at Rhoads Stadium.

After Alabama opened the super regional with a 3-0 win and Texas countered with a 7-5 victory, the Crimson Tide led first in Saturday’s winner-takes-all game. Texas catcher Mary Iakopo’s two-out single knotted the score in the third inning, but that tie was quickly broken on a sacrifice fly in the inning’s bottom half. Back-to-back homers in the third inning by KB Sides and Bailey Hemphill were then the biggest blows dealt by Alabama. The four runs that scored on those homers were all unearned and a byproduct of a two-out error by outfielder Reagan Hathaway.

After Alabama (57-8) extended its lead to 7-1, Shannon Rhodes hit a grand slam for Texas in the fifth frame. UT reliever Ariana Adams kept the Crimson Tide from pulling away, but Alabama’s Montana Fouts retired MK Tedder with two runners aboard in the seventh inning to end the game.

Texas closed out its first season under head coach Mike White with a 46-17 record. The 46 wins were the most for Texas since it went 51-10 in 2013. That 2013 season was also the last time that the Longhorns appeared in the regional semifinals.

Thank you for all the best wishes and love for Miranda #truewarrior pic.twitter.com/OuXKqZizCx

One day after Miranda Elish suffered a scary on-field injury, the junior pitcher returned to the UT dugout. Elish did not suit up. Fans from both Alabama and Texas gave Elish a standing ovation when her name was announced during the pregame introductions.

During a 7-5 win by the Longhorns on Friday, Elish was hit in the face by an errant throw from catcher Mary Iakopo. After being helped off the field, Elish was taken to the hospital as a precautionary measure.

Before Saturday’s showdown, Texas issued an update that stated that “Miranda Elish sustained an injury to her sinuses during Friday night’s game at Alabama. Future participation this season will be determined following evaluation back in Austin. She’s been ruled out for today’s game.”

NOTABLE NUMBER: 28. Texas surrendered 28 homers over its 63 games in 2019. Twelve of those wall-clearing balls were hit by SEC teams. This season, Texas went 6-4 against Alabama, Tennessee, LSU, Ole Miss, Kentucky and Texas A&M.

UP NEXT: Pitcher Brooke Bolinger and outfielders Ki’Audra Hayter and Bekah Alcozer are the only seniors on UT’s 22-player roster. Camille Corona, an infielder from nearby Dripping Springs, is among the five members of the program’s incoming recruiting class.