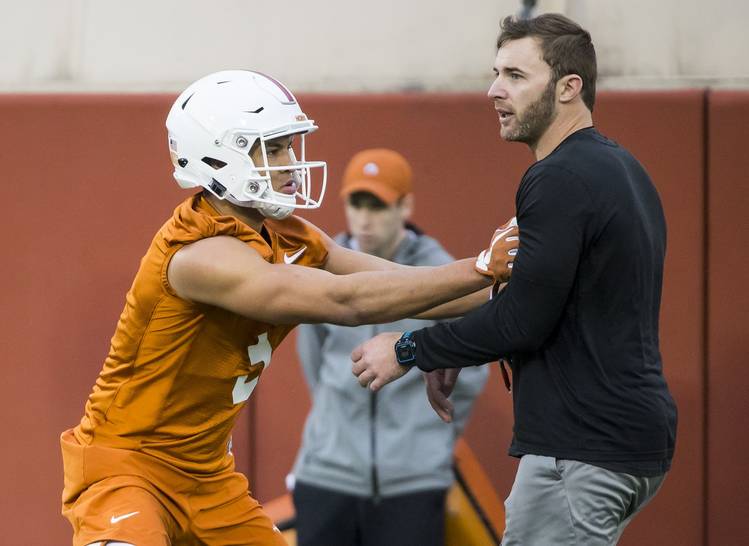 One day after it started its off-season workouts, Texas’ football team sent its head coach and quarterback to California in search of a wayward receiver.

A Texas spokesperson confirmed to the American-Statesman that head coach Tom Herman and quarterback Sam Ehlinger were traveling to Los Angeles on Wednesday to meet with freshman receiver Bru McCoy. Receivers coach Drew Mehringer and Kevin Washington, the director of player development for Texas, also made the trip. Earlier this week, it was reported that McCoy was wavering on his decision to attend Texas and was considering a transfer to USC.

McCoy originally signed with USC but transferred to Texas after spending only a few days on the Los Angeles campus.

A Texas spokesman confirmed to me that Tom Herman, Drew Mehringer, Kevin Washington and QB Sam Ehlinger are flying to LA today to convince Bru McCoy to stay at Texas. First reported by @AnwarRichardson.

Wednesday’s news may remind some Texas fans of a 2015 caravan that featured UT president Gregory Fenves, former coach Charlie Strong and then-athletics director Mike Perrin flying to Tulsa in an attempt to convince Sterlin Gilbert to sign on as the Longhorns’ offensive coordinator. This time, Texas is trying to re-recruit a five-star addition to its 2019 recruiting class.

The 6-3, 215-pound McCoy went through spring drills at Texas and was considered a candidate for playing time at various receiver positions. In Texas’ spring game, McCoy collected three catches while running routes for the Orange and White teams.

With the playoffs winding down, could a battle at UFCU Disch-Falk Field await for two UT signees?