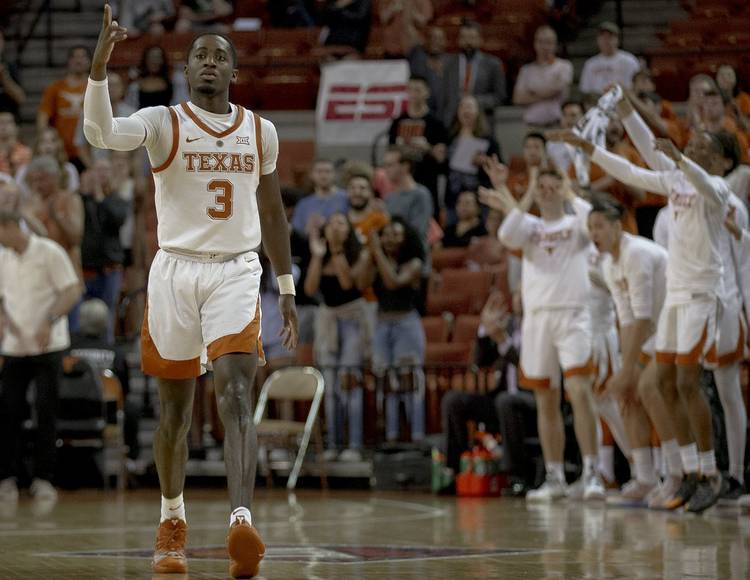 Texas guard Courtney Ramey (3) celebrates a 3-pointer against Colorado during an NCAA college basketball game in the quarterfinals of the NIT on Wednesday, March 27, 2019, in Austin, Texas. [NICK WAGNER/AMERICAN-STATESMAN]

The Lone Star Showdown is finally starting up again. Well, sort of.

Texas and Texas A&M will play a non-conference men’s basketball game on Dec. 8 at the new Dickies Arena in downtown Fort Worth, the facility announced Friday. The facility, the new home to the Fort Worth Stock Show and Rodeo, will hold 14,000.

That date just happens to be the day after the Big 12 and SEC football championship games. It’s also the same day bowl games and the College Football Playoff semifinals are finalized.

Still, it’s a huge open window for men’s basketball. It’s an even bigger opportunity for the renewal of the hoops intrastate rivalry that was near extinction after the Aggies left the Big 12 in 2012.

“This is a terrific opportunity to renew an important rivalry for the fans in the great state of Texas,” UT coach Shaka Smart said in a statement. “We’re excited about the chance to play in a first-class arena in front of our fans in the Metroplex.”

New A&M coach Buzz Williams said he’s seen the rivalry firsthand, “so I know how important this game is to our players, coaches and fans.”

“This is one of those games that generates passion from both sides and we’re looking forward to the challenge,” Williams said in a statement.

UT and A&M have not played a men’s basketball regular-season game since the Battle 4 Atlantis in November 2015. That was played in the Bahamas. A&M won 84-73. The two schools then staged a preseason scrimmage in October 2017 to help raise money for Hurricane Harvey relief.

The two schools generally avoided each other for years after A&M split for the SEC. But frozen relationships started to thaw. Texas and A&M have played non-conference baseball games in recent years and competed at each other’s track meets.

The football series is still on ice, however. Earlier this year, UT athletic director Chris Del Conte called then-A&M AD Scott Woodward about restarting the series. Woodward, who has since left A&M for LSU, said the Aggies’ schedule was full.

A&M could have juggled games in 2022 and 2023 but Woodward declined. Texas then signed a home-and-home contract with Alabama. A&M will play Miami in those years.

“It’s an interesting game for us to do and play,” Woodward told TexAgs. “The thing is, it has to work and it has to match for us. … We’re not going to jump when someone asks, just like we don’t do with anyone. It has to work for Texas A&M, for our strategy.”