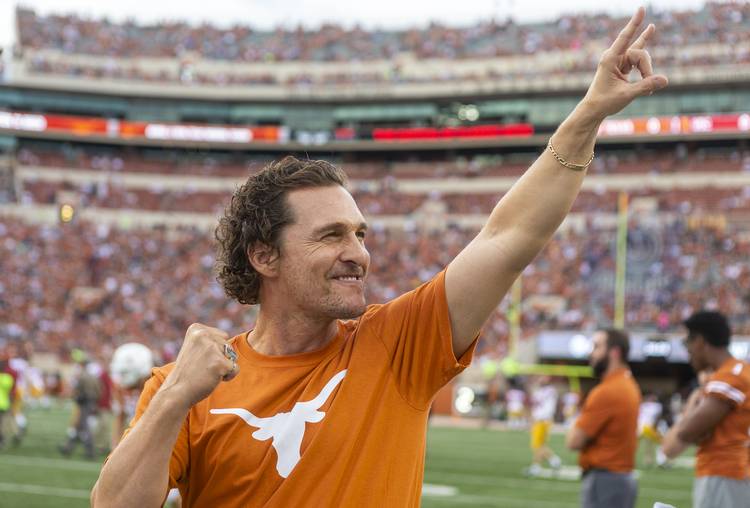 Seventy-three days are left until the start of the football season, but Texas quarterback Sam Ehlinger was ready to play games on Wednesday.

On his Twitter account, Ehlinger posted a photo of himself and actor Matthew McConaughey. Ehlinger asked his 57,000 followers to guess what McConaughey said to him before a 37-14 win over USC on Sept. 15, 2018. He promised $100 for a successful guess.

If anyone can guess what @McConaughey said during this conversation pre-game, I will pay you $100. pic.twitter.com/gHr5ityzf2

Below are some of the responses that Ehlinger received:

He’s trying to sell you a Lincoln MKZ

“We are ghosts… driving meat-coated skeletons made from stardust, riding a rock, hurtling through the cosmos. Fear nothing.”

"I-35 is the glistening back of an infinite Leviathan deep in the silky black ocean, and your car is a grain of sand, churning around it to infinity under the light of a pale moon and stars from galaxies that died eons ago like dried tears on Zeus' eternal cheek…"

Samuel. Sammy-Sam. Sam-U-L. The Good Book says that Samuel was the son of Elkanah, but you’re the son of Texas, brother. You got that elk blood in you though. You know what elk do, Sammy Miami? They run. They run to victory, salvation and FREEDOM. Just run, Sam. Be free. Hook Em.

‘Texas is back’ is a state of mind. Texas will never be “back.” Texas has always been here. In here. Up here. All around us, compadre. It’s not something you strive for. You’re always strivin’ to maintain existence. S-T-R-I-V-I-N.

Baker Mayfield on Sam Ehlinger: ‘Hope he knows I don’t like him’