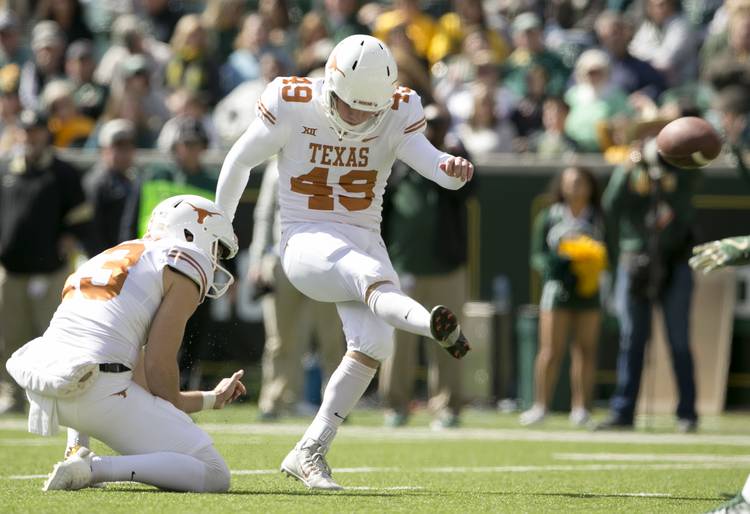 To close out his collegiate career, former Texas kicker Joshua Rowland will just head down the highway.

Texas State’s football team has added Rowland to its roster. According to American-Statesman correspondent Keff Ciardello, Rowland will be a graduate transfer for the Bobcats. Rowland joins quarterbacks Shane Buechele (SMU) and Cameron Rising (Utah), running backs Kyle Porter (Houston) and Toneil Carter (Sam Houston State) and deep snapper Michael David Poujol (SMU) among the players who have transferred from Texas this off-season.

Confirmed Rowland is a grad transfer with one year left to play at #TXST. Bobcats get an experienced kicker late in the offseason. He made 11 of 18 field goals, 38-38 on extra points and 34 touchbacks on 69 kickoffs at #HookEm. https://t.co/a9SWCT6kcI

Before becoming a member of Tom Herman’s first recruiting class at Texas, Rowland spent his first two years of college at Mississippi Gulf Coast Community College. He made 11 field goals in 2017, but he also missed seven three-point kicks and was benched for a short period.

This past season, Rowland lost a preseason battle with freshman Cameron Dicker for playing time. Rowland was only used for one onside kickoff against Oklahoma State but was able to write the season off as a redshirt year. After UT’s campaign ended with a win in the Sugar Bowl, Dicker praised Rowland and said he couldn’t have asked for a better teammate.

Rowland should be in the mix for playing time when Texas State opens its season at Texas A&M on Aug. 29. Sophomore Foster Hilborn, who redshirted last year after kicking four field goals in 2017, is currently the only other kicker on the team’s roster. Last year, Texas State managed only 17 touchbacks and missed eight of the 14 field goals it attempted.