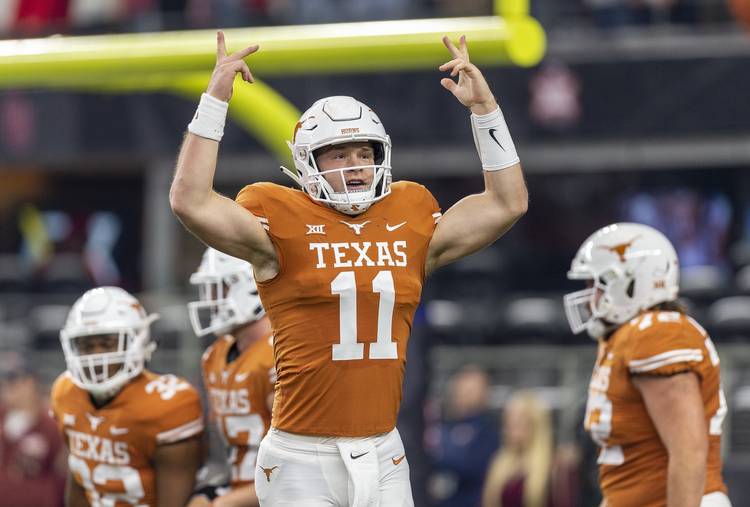 Texas quarterback Sam Ehlinger (11) celebrates a touchdown against Oklahoma in the first half of the Big 12 Conference Championship NCAA football game at AT&T Stadium in Arlington, Texas, Saturday, Dec. 1, 2018. [Stephen Spillman for Statesman]

ARLINGTON — Ever since his arrival, Texas coach Tom Herman has preached that the only opinions that matter are the ones residing “inside these walls,” meaning the UT football building.

He stuck to that theme Tuesday when asked about the previous comments from Baker Mayfield and Terry Bradshaw about quarterback Sam Ehlinger.

Mayfield, the Heisman Trophy winner from Lake Travis, ripped the Westlake-raised Ehlinger. Bradshaw told a group of Louisiana Tech fans that Ehlinger “ain’t that good.” It should’ve been manna from heaven for a coach who actively seeks out bulletin board material.

“I don’t know if excited was the first emotion,” Herman said during his press conference from the podium at Big 12 media days. “But I heard it. I’d be lying to you if I told you I don’t know what you’re talking about. I certainly do. But it’s irrelevant what other people say about us and our program. It doesn’t really phase us. So the irrelevancy of it was at an all-time high.”

Herman then noted that “our guys, they file certain things away.”

“We had a bowl game recently where the other team was very disrespectful and that gave us some motivation leading up to the bowl game,” Herman said. “Sam loves to play with a chip on his shoulder, and I”m sure he’ll use this to crank it up a notch. But again, it’s pretty irrelevant in terms of how it affects our program. We’re worried about our program.”

Two years ago, Missouri players openly mocked the UT players by doing the Horns Down at a pre-Texas Bowl luncheon. The Longhorns won 33-16. Then last season, Georgia players acted like they were not interested in playing the Sugar Bowl after missing out on a playoff berth. The Horns crushed the Bulldogs 28-21.

Playing A&M again?: The Texas men’s basketball team and volleyball team will rekindle their rivalries with Texas A&M this fall. But there is no football game scheduled for the foreseeable future. Some Aggies like it that way. Herman would prefer to restart the football rivalry.

“I’d love to see the rivalry renewed,” Herman said. “I think it’s great for college football. It’s great for Texas. There’s plenty of other intrastate rivals that are in different conferences that find a way to play each other. … I don’t know what needs to happen, because I don’t know what happened in 2011. I wasn’t in those meetings. But I do think we got some really smart people in both university’s administrations, we can find a way to make that game happen.”

DeLoss Dodds was the UT athletic director at the time A&M left the Big 12 for the SEC.

Injury update: Herman said the only serious injury of note is freshman receiver Al’Vonte Woodard’s foot injury (Jones fracture) that will sideline him most of the year. “Other than that, we’re really healthy,” Herman said. “We’re really excited. It hit the buy-in level is extremely high right now and it’s a really fun group to coach.”

Should the Horns Down taunt be an unsportsmanlike penalty? Big 12 official: ‘It depends’