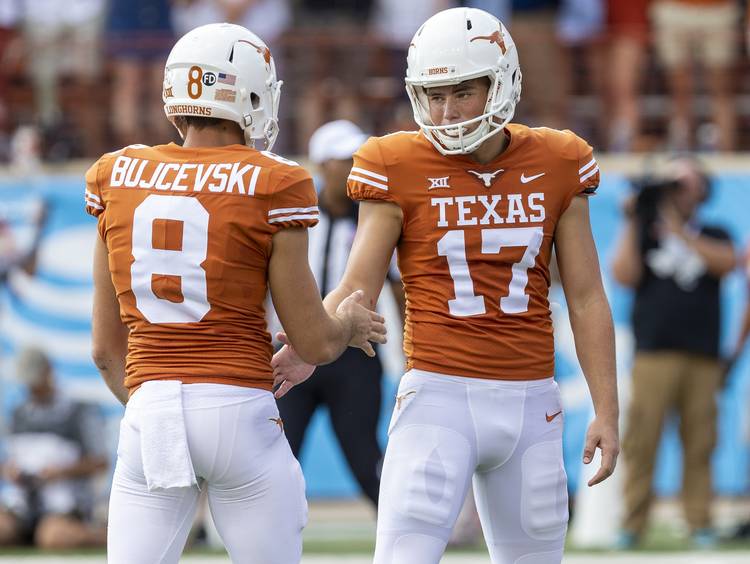 On Wednesday, UT sophomores Cameron Dicker and Ryan Bujcevski were respectively placed on the preseason watch lists for the Lou Groza and Ray Guy awards.

Dicker joined 29 other kickers on a lookout list for the nation’s top kicker. Bujcevski was one of 26 punters on the watch list for the Ray Guy Award, which is an honor that his cousin received while playing at Texas in 2017. Michael Dickson is UT’s only winner of a Ray Guy Award that was first given out in 2000. No Longhorns has won the Lou Groza Award, which debuted in 1992.

An Austin native, Dicker is coming off a season in which he handled kickoffs, led UT in scoring and converted 18 of the 25 field goals he attempted. Those 105 points and 18 field goals were both records for Texas freshman. One of those field goals was a 40-yard kick with nine seconds left in a 48-45 win over Oklahoma.

Earlier this month, Dicker joined three of his Texas teammates on the Big 12’s preseason team.

In 2018, Bujcevski’s average of 40.3 yards per punt ranked fourth in the Big 12. Bujcevski began playing football when he was 17, so room for improvement exists for the Australian. In fact, Dickson was in a similar situation when he got to Texas in 2015 and he followed up a 41.3-yard average as a freshman with a 47.4-yard sophomore season.