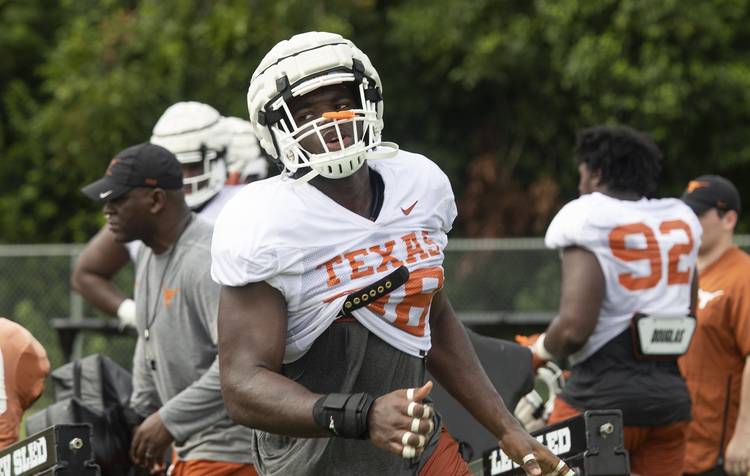 Texas held its third practice of the season on Sunday, and the media was granted access to a portion of the drills. Here are three observations:

Last season, a handful of Texas freshmen took advantage of a new rule that allows eligible players to play in up to four games and still take a redshirt season. Linebacker Ayodele Adeoye, wide receiver Malcolm Epps and defensive linemen Keondre Coburn and Moro Ojomo all appeared in at least two games in 2018. All four still have four years of eligibility ahead of them.

Will any of them make the leap from experienced redshirt to starter this season? Epps sits behind senior Collin Johnson on the depth chart, but his spring consisted of rave reviews. On Sunday, both Coburn and Adeoye ran with the first-string defense during a pursuit drill. Ojomo earned a second-team rep.

When he met with the media on Saturday, running back Keaontay Ingram stated that his freshman year was “highly disappointing.” That bit of self-reflection may have surprised some since his 708 rushing yards were the ninth-best total ever for a UT freshman. Ingram, though, seemed to take issue with his per-carry average of just under five yards. Ingram’s average rush ranked 93rd nationally and seventh in the Big 12.

So if last year was a disappointing debut, what would Ingram view as a successful season? “Success? Average more than five yards per carry, that’s all I can say about that,” he said. The Carthage native added that he also wants to score more and show more maturity in the training room.

Ingram will get his shot at success. On Sunday, he continued to lead a line that features only one other running back (junior Daniel Young) with 10 career carries. But what does history tell us about the encore performances of UT’s top freshmen rushers?

Texas has six quarterbacks listed on the roster, but only five were spotted in black jerseys on Sunday morning. Tremayne Prudhomme, a 6-1, 190-pound walk-on who redshirted last year, was instead working out with assistant coach Jason Washington and UT’s cornerbacks. That left freshmen walk-ons Sam Saxton and Ben Ballard to share fourth-string reps behind scholarship quarterbacks Sam Ehlinger, Casey Thompson and Roschon Johnson.

Saxton and Ballard both hail from the Austin area. A three-star recruit from St. Michael’s whose grandfather was an All-American at Texas, Saxton walked on after turning down scholarship offers from schools like Southern Miss, Rutgers and Memphis.  While quarterbacking Hyde Park to a 6-4 record in 2018, Ballard earned two game balls from the American-Statesman.