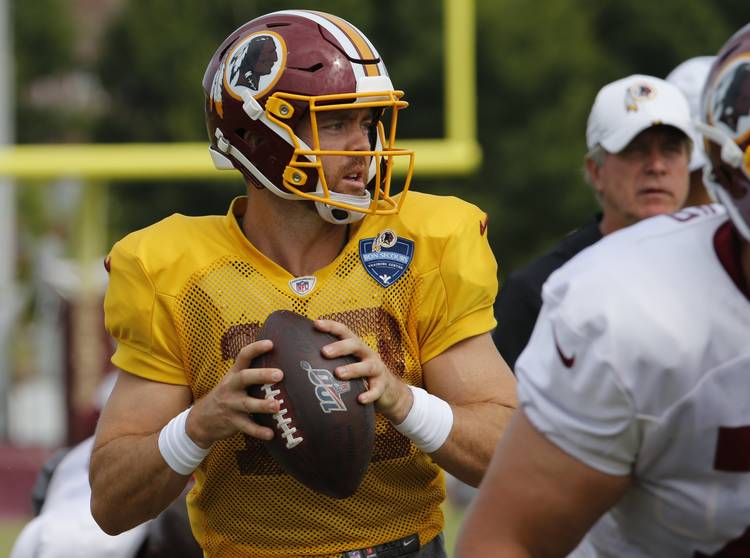 Longhorns quarterbacks in the NFL:

Colt McCoy is running with the first-team Washington Redskins offense. He hasn’t won the job yet over Case Keenum or rookie Dwayne Haskins, but it’d be nice to see him get another crack at it. Texas’ legacy of NFL quarterbacks isn’t a strong one. Oklahoma’s have been the No. 1 pick two years running, so it’s time for the Longhorns to make up ground. A big story in USA Today cited McCoy as one of 18 current NFL quarterbacks from the state of Texas although only he and Garrett Gilbert (Browns) played for the Longhorns. Ten of the 18 are starters. California ranks second with eight. No other state has produced more than two. Of those 18, I counted eight that Texas didn’t even offer, including a bunch who wanted to be Longhorns like Andrew Luck and J.T. Barrett. Other than Bobby Layne’s Hall of Fame career and McCoy, the only other Longhorns with playing time in the NFL were Vince Young (31-19 record), Chris Simms (7-9) and Gilbert (no starts). Rick McIvor, who had the strongest arm of any UT passer I ever saw and once threw a ball 90 yards in practice, was drafted by the St. Louis Cardinals but threw only four NFL passes. As for Tyrone Swoopes, he was on the practice squad with the Seattle Seahawks for two years as a tight end before getting released a few days ago. McCoy has started just 27 games and has a 7-20 record, but no wins since 2014 as a starter.

Let’s be honest. Texas is loaded at wide receiver. Bru McCoy, who needs you? But don’t quote me on that. Even with him in the rearview mirror, I don’t think Tom Herman is staying up nights worrying about that position. Freshman Jake Smith is all that and is already developing a bond with Sam Ehlinger. Maybe he’ll be the next Jordan Shipley. “He’s done a great job as well of coming in and adapting to what’s being taught,” the quarterback said of Smith. “To learn the whole playbook in the first two days, not expected, but he’s doing a great job of continuing to use his speed, using his athletic ability. One thing about him that really has surprised me, and I’ve admired, is he has really strong hands. A guy that’s super fast, who runs really fast, his hands might be deficient. But that’s not the case.” Herman said Smith and sophomore Joshua Moore have to prove they deserve to be on the field, and I think they will. Brennan Eagles and Malcolm Epps also are ready to contribute big-time. And Devin Duvernay will stretch the field like few others. He told me that he thinks he’s the fastest player in the Big 12, and he just might be. Oh, and Texas has big-time weapon Collin Johnson, a terror in the red zone, by the way.

Don’t look now, but Poona Ford’s star is rising with the Seattle Seahawks. With defensive lineman Jarran Reed out with a six-game suspension and first-round pick L.J. Collier out with an ankle injury, the value of the second-year defensive tackle only figures to increase. The NFL totally missed the boat on this rugged, dedicated player, who went undrafted out of Texas because he’s short despite an 80-inch wingspan and a high motor. “He has a chance to be one of the best nose tackles to have ever played,” said Seahawks center Justin Britt. “He’s quick, he’s great with his hands.” Ford had 17 tackles, three of them for losses, in Seattle’s last five games and received a 91.5 run defense grade from Pro Football Focus. No rookie interior lineman since 2006 has scored higher, not even Aaron Donald, whose mark was 90.8.

For the rest of Kirk’s 9 Things, including his thoughts on Tom Brady, Texas State coach Jake Spavital and the Dan Jenkins Medal for Excellence in Sportswriting, click here.

Three observations from the fifth day of Texas’ fall camp