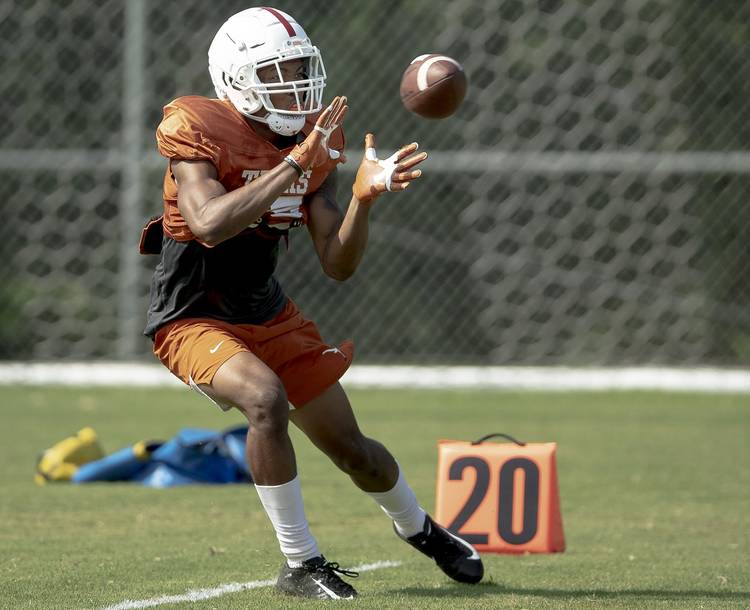 The fifth day of UT’s fall camp was held on Wednesday, and the media was granted access to a portion of the drills. Here are three observations:

1. As UT’s 2005 national championship team held an unofficial reunion at the Whitaker Sports Complex — Michael Huff, Brian Orakpo, Jamaal Charles, Kasey Studdard and Greg Davis were all spotted at Wednesday’s practice — the Longhorns practiced in full pads for the first time. The media wasn’t privy to any tangling between Texas’ offensive and defensive players. Some pushing around, though, did occur while the players worked out with their position groups.

Texas senior Jeffrey McCulloch may have been the happiest to see the pads come back. In one linebacker drill, he ran over a teammate after assuming the role of a running back. On that drill’s last snap, he then stopped Joseph Ossai and stripped the football.

2. In its 2019 recruiting class, Texas signed five players who could line up at receiver. The since-departed Bru McCoy created a buzz during his short stay on campus, Jordan Whittington has already made a star turn in the backfield and Jake Smith has become the talk of the town since his arrival this summer. But what about the other two receivers?

Both Kennedy Lewis and Marcus Washington could provide depth for Texas this fall. During a pursuit drill on Wednesday, Lewis was the “Z” receiver for an offense run by back-up quarterback Casey Thompson. Later on, Washington ran routes in a line of “X” receivers and was then praised by assistant coach Drew Mehringer for a rep in a “rip and run” drill.

The 6-2, 200-pound Washington is a four-star signee out of St. Louis. Lewis is a 6-3, 200-pound three-star recruit out of Melissa. During their senior years of high school, Washington and Lewis combined for 82 receptions, 1,386 receiving yards and 21 touchdowns catches.

3. Earlier this week, UT freshman Junior Angilau was placed on the watch list for the 2019 Polynesian College Football Player of the Year Award.  Will Angilau get enough work this year to stay in contention for an award that has been won by former Oregon star Marcus Mariota, ex-Notre Dame offensive lineman Ronnie Stanley and current Alabama quarterback Tua Tagovailoa? During the aforementioned pursuit drill, Angilau earned first-string reps at both of the guard positions.

For what it’s worth, Angilau also recently won a one-on-one match-up with defensive tackle Keondre Coburn … in a sumo wrestling match.

The 6-6, 300-pound Angilau redshirted during the 2018 season. When he signed with Texas, Angilau was a viewed as a four-star prospect from Salt Lake City.

Bohls: Texas’ legacy of NFL quarterbacks isn’t a strong one