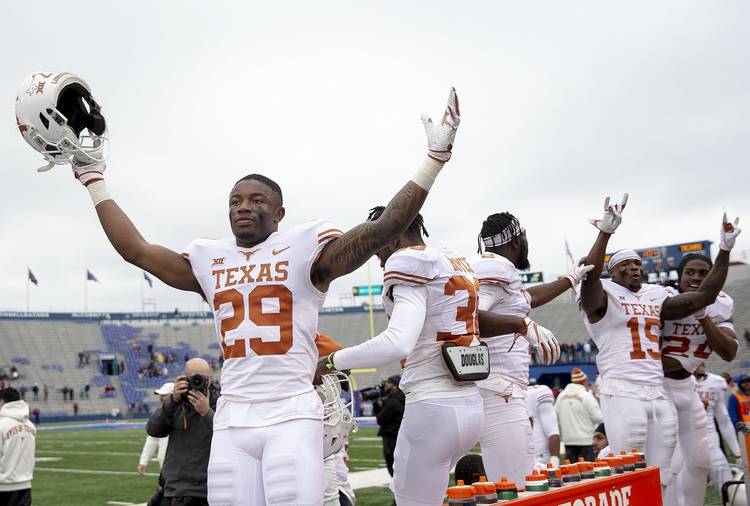 On Texas defensive back Josh Thompson:

Do not sleep on Josh Thompson in the Longhorns secondary. He’s as brash as he is physical. After Tuesday’s practice, the junior from Nacogdoches said emphatically that he’s faster than UT wideout Devin Duvernay, who told me at Big 12 media days that he was the fastest player in the conference. Asked who is the best blitzer out of the secondary, Thompson said, “Me.” How many sacks is he shooting for in 2019? “Hopefully, a lot.” And just for good measure, he says he expects to handle kick return duties this fall as well. Thompson could play corner or the nickel or dime position.

On WR Collin Johnson’s bench-pressing abilities and other pass-catching notes:

Texas wide receiver Collin Johnson has got him some guns. He’s much more ripped this year and credits strength coach Yancy McKnight. Johnson’s bench-pressing 360 pounds. “That’s definitely a PR. I’m all about getting better,” he said. Johnson also weighed in on Duvernay, saying, “What do they call him, a nightmare in the slot? I’m excited to go to war with him. He’s the best route runner I’ve ever been with.”

On tight end Cade Brewer’s role on this year’s team:

Cade Brewer appears to be settling into the tight end role and even had an outstanding, one-handed catch for a touchdown in the first full scrimmage. “I stuck my hand out and caught the ball,” he said. “I’m going to try to catch balls with two hands now, though.”

For the rest of Kirk’s 9 Things, including his thoughts on the “Rich Paul Rule,” Antonio Brown and the NFL preseason, click here.