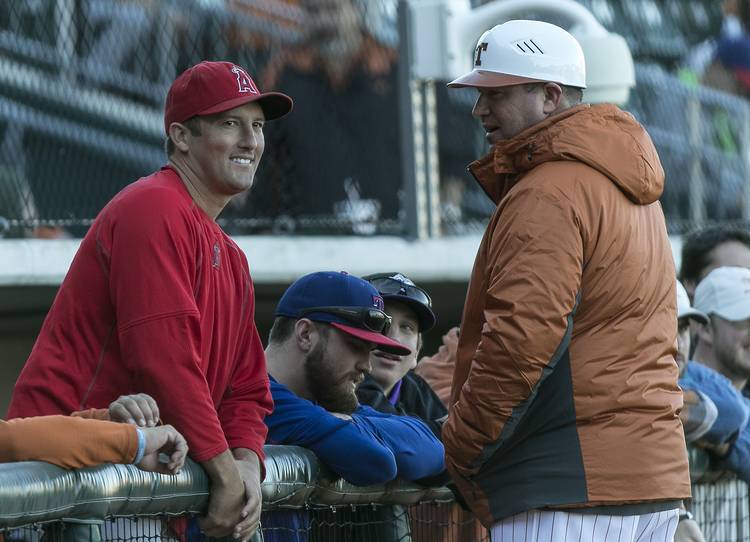 Once again a student at the University of Texas, Huston Street has rejoined the baseball team.

Street will return to UFCU Disch-Falk Field during the 2020 season as a student assistant coach, the school announced on Thursday. An Austin native, Street was a three-time All-American pitcher at Texas from 2002-04. He was also the MVP of the 2002 College World Series.

Texas has not yet announced what Street will be studying during the upcoming school year.

Back to where it all began, y’all.

Three-time All-American and ‘05 AL Rookie of the Year @HustonStreet will return to the squad as a student assistant coach this season.#HookEm 🤘 pic.twitter.com/PwkSFDdJQY

Street, 36, has not been a stranger at UFCU Disch-Falk Field since he left Texas. In addition to appearing at alumni games, Street has occasionally mentored UT’s pitchers. This past season, Texas junior Blair Henley told a story about Street advising him to tinker with his on-mound approach and just think about throwing that first strike.

“Huston Street has a passion for The University of Texas, especially Texas Baseball, and will be an asset for the program in many capacities during the 2020 season,” Texas coach David Pierce said in a statement. “Obviously Huston has exhausted his eligibility but he is planning to return to campus to complete his degree and give back to the program that he helped win a National Championship. He loves competition, has so much to offer and his presence will be awesome for our players. The bottom line is he’s a winner.”

This is the second addition of significance to Pierce’s coaching staff this off-season. Earlier this summer, five-time all-star Troy Tulowitzki replaced Phil Haig as UT’s volunteer assistant. The recently-retired Tulowitzk will coach hitting and mentor UT’s infielders. The hiring of Tulowitzki also reshuffled the duties of assistant coach Sean Allen, who is now the program’s pitching coach.

Like Tulowitzki, Street spent 13 seasons in the major leagues. From 2005-17, he registered 324 saves — a total that currently ranks 19th in the MLB record books — with Oakland, Colorado, San Diego and the Los Angeles Angels.

Tulowitzki and Street were teammates in Colorado from 2009-11. In fact, it was Street who informed Pierce of Tulowitzki’s interest in coaching at UT.