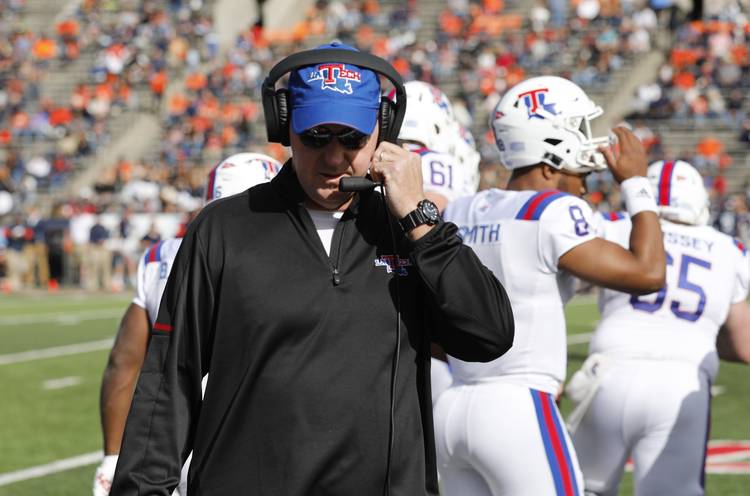 Here’s some of what he had to say:

“It’s always great to hear a player’s perspective after you wrap up fall camp and prepare to head into Week 1 of the season,” Holtz said in his opening statement. “We’ve broke camp and entered into our regular schedule this week. Some of the things we worked on in camp: Bringing in a new defensive coordinator, bringing in other new coaches, trying to get everything and terminology put into place, and trying to evaluate leadership and determining a depth chart. I think we’ve had an outstanding fall camp in addressing all those areas of need.”

Then he took some questions.

On working in the newcomers during fall camp:

“Fall camp is all about developing depth. You’re looking at roster from top to bottom. I think this is a very talented team we have right now. When I look at the full 70 travel list, I think it’s a mix of a lot of experience with a lot of new faces who by the end of this season will become very familiar with Louisiana Tech fans.

“You look at guys like Isaiah Graham, who sat out last year after transferring in from TCU. He’s going to be a very important piece for us outside this year and make an immediate impact. Malik Stanley — a grad transfer from South Alabama — is going to make an immediate impact as well. I look at Willie Allen at left tackle and the job that he’s done this fall. At safety we’ve talked about Bee Jay Williamson and his athleticism and the role he’s going to play for us. Trey Baldwin — a linebacker who signed at Missouri out of high school — went to junior college and sat out last year. We’ve been really impressed with his progress and the way he’s emerged for us. There’s going to be a lot of new faces mixed in with these experienced, seasoned vets.”

On opening the season at No. 10 Texas:

“I’ve seen a lot written about Texas being back and a consensus top-10 team, so we know what type of opponent we’re playing right from the get go. I think coach Herman has done a great job with this football team. I think it’s good for college football when Texas is winning. They’ve got an incredible tradition and history, and I’ve got nothing but respect for that program. I know what type of challenge we have in front of us. It’s a great challenge, great opportunity, and something our players and coaches are really looking forward to.”