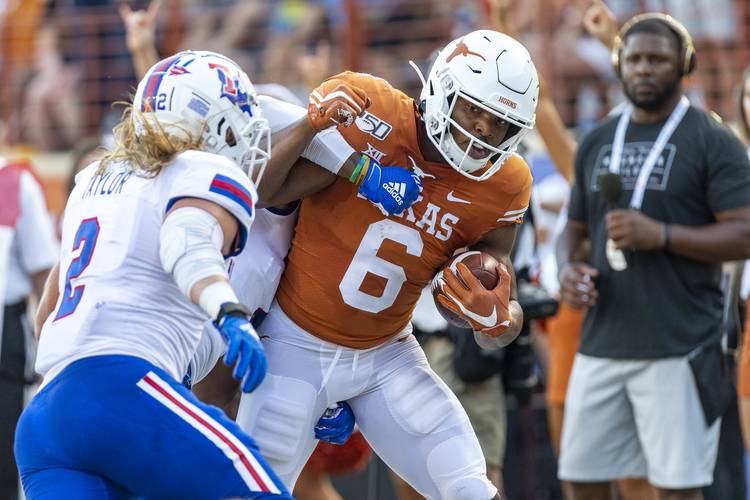 It’s all over at Royal-Memorial Stadium. No. 10-ranked Texas, which was a 20.5-point favorite tonight, has beaten Conference USA’s Louisiana Tech Bulldogs 45-14.

The defense stifled Louisiana Tech for three quarters, while Sam Ehlinger looked just as sharp to start the season and he looked ending the 2018 season. He looked confident, completed 28 of his 38 attempts and took two good hits but for the most part kept himself out of harm’s way when he chose to run. Devin Duvernay emerged as a potentially very productive piece of this offense. The Longhorns produced three defensive turnovers.

First off, the Bulldogs are no cupcakes. But they looked overwhelmed pretty much all night, venturing into scoring range a handful of times but striking out because of two missed field goals and a turnover on downs. Ehlinger was never really challenged.

1. What a night for Devin Duvernay. The senior receiver shined in his new slot position, which Lil’Jordan Humphrey rode to a 86-catch, 1,176-yard, 9-touchdown season in 2018. Duvernay touched the ball on six of Texas’ first eight plays, including a 36-yard kickoff return to open the game and four catches (and a TD) on the first drive.

Duvernay finished with nine catches for 51 yards and a TD.

Last year, Humphrey led UT with six catches for 82 yards in the season-opening loss at Maryland.

2. What a night for Sam Ehlinger. No. 11 looked steady, kept his violent runs to a minimum and spread the wealth around, completing passes to 10 different players and threw TDs to three different receivers — Duvernay, Johnson and Brennan Eagles. He took an end zone shot to Jake Smith in the third, but it was incomplete.

Texas lifted Ehlinger for most of the fourth quarter.

3. It’s obviously too early to talk about the Heisman, but here’s how the top six contenders heading into the season fared in Week 1:

4. The hit of the night wasn’t the biggest hit literally — that honor goes to Jeffrey McCulloch, who popped Tech’s Israel Tucker after a short catch over the middle — but it was figuratively. Junior safety Chris Brown stopped a Tech receiver just short of the first down marker on a fourth-and-1 rollout completion in UT territory.

5. We got our first look at Casey Thompson, Ehlinger’s redshirt freshman backup. In the fourth quarter, we saw Thompson and Roschon Johnson (playing running back) in the backfield at the same time.

Texas went three-and-out on Thompson’s first drive and punted on its first two drives with him, but scored late in the game.

6. Ingram quietly had a nice night. He finished with 78 yards and a touchdown on 11 carries.

7. Horns up: Ossai was all over the place (5 tackles, 1 tackle for loss, 1 interception), looked good rushing off the edge, and had the pick-six taken away; new players like Tyler Owens, David Gbenda, Jalen Green and DeMarvion Overshown all had their moments; Green had a good night (5 tackles, 2 pass breakups) and looked solid both in coverage and when tackling.

8. Horns down: Jones’ penalty robbed the defense of a big play; Texas’ decision to play Journey’s “Don’t Stop Believin'” provided and instant spark and cell phone flashlights popping up immediately, but the song was played right before the second half kickoff, not at a time when it would’ve provided more oomph, like in between the third and fourth quarters; the tight ends were out there blocking, but didn’t provide anything in terms of receptions; and nose tackle Keondre Coburn, one of the keys to the defense, had a pretty quiet night (1 tackle).

10. The secondary, which is considered the strength of the defense, did not disappoint.  DeMarvion Overshown had a sack to force a punt, Green had a pass breakup in the end zone, Montrell Estelle tipped a pass into the end zone, B.J. Foster sniffed out a third-down screen pass to force a punt, and Brown had the fourth-down stop to force a turnover on downs. Caden Sterns led the team with seven tackles.

In a couple of months, when the College Football Playoff selection committee comes out with its first rankings, perhaps this early-season Big 12-SEC showdown will have made an impact. Certainly the sixth-ranked Tigers represent a big-time pelt that Texas can place on its wall.