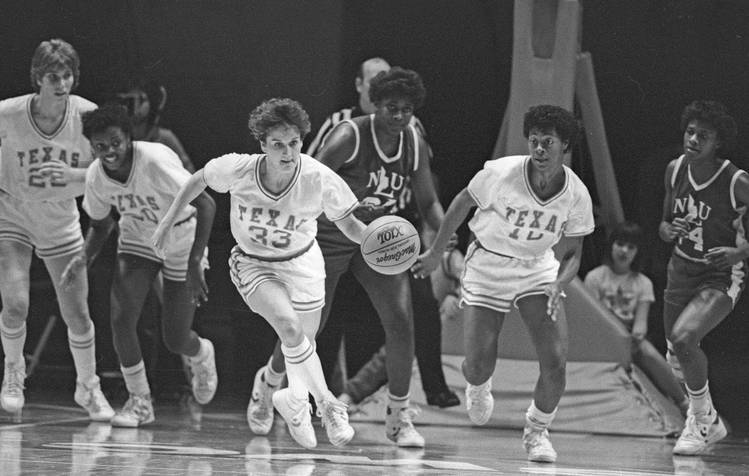 Kamie Ethridge (33) was a two-time All-American at Texas. She holds the school record for career assists. (Photo courtesy of the Texas athletic department)

Over the years, Texas has retired the numbers that were once worn by six football players, three men who played basketball on the 40 Acres and a half-dozen standouts in baseball.

For the first time, a woman is set to receive that honor.

Texas announced on Wednesday afternoon that its women’s basketball program will retire Kamie Ethridge’s jersey. Ethridge will be honored at halftime of Saturday’s football game between Texas and LSU. Ethridge wore No. 33 while starring at Texas from 1982-86 and leading the Longhorns to the 1986 NCAA title.

Texas has never before retired the jersey of a female student-athlete.

Proud to honor one of our own. 🤘

A native of Lubbock, Ethridge was a two-time All-American whose 776 career assists still stand as a record at Texas. Ethridge is one of three Longhorns to win the Wade Trophy, which is given annually to the best player in women’s basketball. She also earned a goal medal with Team USA at the 1988 Seoul Games.

Ethridge is currently the head coach at Washington State.

The retirement of Ethridge’s jersey won’t cause any issues on UT’s current roster. The No. 33 has been worn by six players since Ethridge’s last game. Rellah Boothe, however, last donned that jersey during the 2017-18 season.

#tbt: Sam Ehlinger, K’Lavon Chaisson and the Class 6A, Division I title game