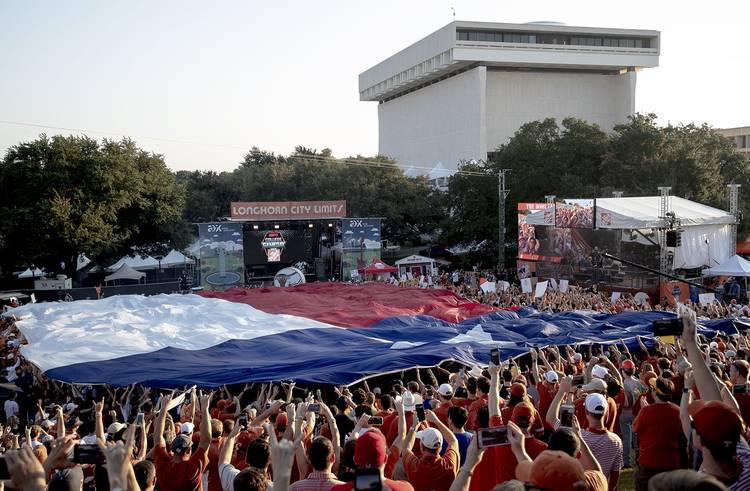 Fans stretch a giant Texas state flag across the grounds of the LBJ Lawn during ESPN's 'College GameDay' broadcast on Saturday. [NICK WAGNER/AMERICAN-STATESMAN]

Advertisement
ESPN brought its weekly “College GameDay” show to Austin on Saturday morning for the first time in a decade — and the Longhorns were ready … early. Some students began lining up at 10:30 p.m. Friday, and the number reached the thousands by Friday morning. They were greeted early by Texas Athletic Director Chris Del Conte.

Chris Del Conte is back out, schmoozing with students. Said he brought 500 doughnuts and 500 breakfast tacos here at 5:30 am. “They we’re gone just like that.” #hookem #gameday

Chris Del Conte told me he thinks there were 4,000 people here waiting to get in, about 10k now. “Never underestimate a united Texas,” he says. #hookem #gameday

Texas is ready for Corso 🤠 pic.twitter.com/WbWCtzDENq

As always, signs were aplenty.

“This is the best College GameDay crowd I’ve seen in person,” @BrooksAD.

Here’s what happens when @CollegeGameDay pulls up to campus for the first time in 10 years: pic.twitter.com/7ab1JTaw4q

The worst kind of pain 🛴 pic.twitter.com/hwY8kyMSBx

‘Ditto on that’: It was just a normal ‘College GameDay,’ and then Longhorn spirit animal Matthew McConaughey arrived