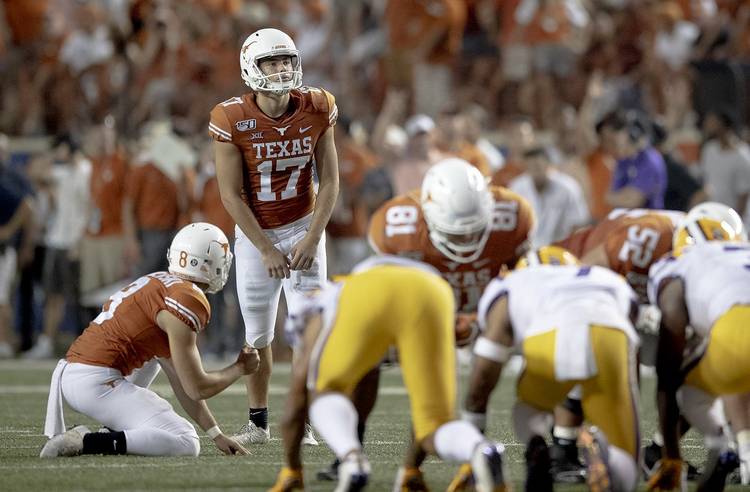 Say UT’s offense had driven the football into enemy territory. Let’s add the caveat that Texas is losing by two points. Oh, and only a few seconds remain in the game. In this scenario, Herman said he has more faith in Cameron Dicker’s right leg than a Hail Mary pass.

When asked about Dicker’s range, Herman said the sophomore can make field goals from just under 60 yards. Herman added that Dicker nailed a 57-yard attempt to end a simulated two-minute drill during UT’s fall camp. The longest conversion of Dicker’s 20 career field goals was a 52-yard make at Texas Tech in 2018.

This past Saturday, Dicker kicked a 47-yard field goal in the fourth quarter of a 45-38 loss to LSU. Two quarters earlier, though, Dicker was sent out to try a 58-yard kick. After LSU called a timeout with 4:42 left, Texas pulled Dicker and instead sent out punter Ryan Bujcevski.

Herman explained on Monday that while Dicker had a breeze behind him, he decided to play if safe after figuring that LSU called its timeout to set up a return off a possible miss. Added Herman: “If he mishit it, we were going to have a bunch of 300-pound guys trying to cover a guy returning a kick.”

Had Dicker attempted and made that kick, it would have been tied for the fifth-longest field goal in school history. Russell Erxleben is the only kicker who has hit a 58-yard field goal for the Longhorns. The six longest field goals in UT’s record books belong to Erxleben.