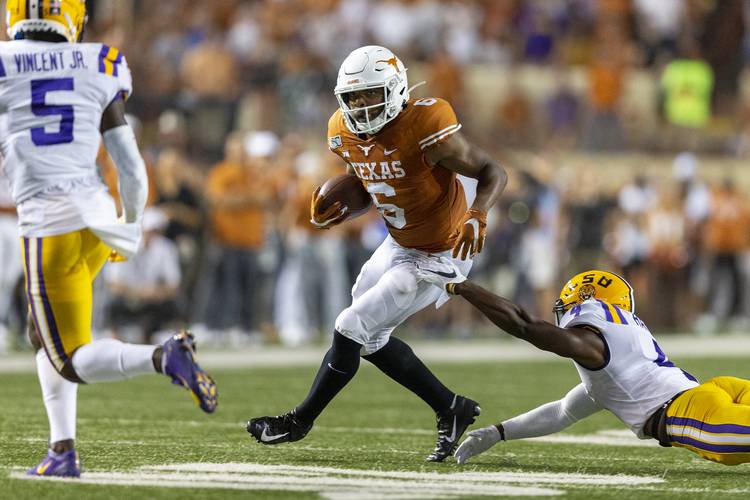 After catching 12 footballs on Saturday night, Texas receiver Devin Duvernay began this week by hauling in an award.

On Monday, Duvernay shared the Big 12’s offensive player of the week award with Baylor receiver Denzel Mims. In a 45-38 loss to LSU, Duvernay led Texas in receptions, receiving yards (154) and touchdown catches (two). Duvernay, who set a school record with his 11 second-half catches, also threw an eight-yard pass and had one rushing attempt.

While Baylor routed UT-San Antonio over the weekend, Mims scored on three of his seven catches. His 101-yard effort was the seventh 100-yard game of his four-year career.

This is the second time that Duvernay has been recognized by the Big 12. During the 2016 season, he was named the conference’s newcomer of the week after a 96-yard performance against Iowa State.

The 12 catches and 154 receiving yards were both career-high totals for Duvernay. Among the nation’s pass catchers, Duvernay’s 21 receptions trail only the 24 footballs that Purdue’s Rondale Moore has caught during this young season. This week, Texas will face a Rice team that surrendered 158 receiving yards to Wake Forest’s Scotty Washington last week.

Tom Herman: ‘We don’t live in a world of what-ifs or shoulda-woulda-coulda’s’

Longhorn Confidential: It’s Rice week, but too many questions linger over LSU