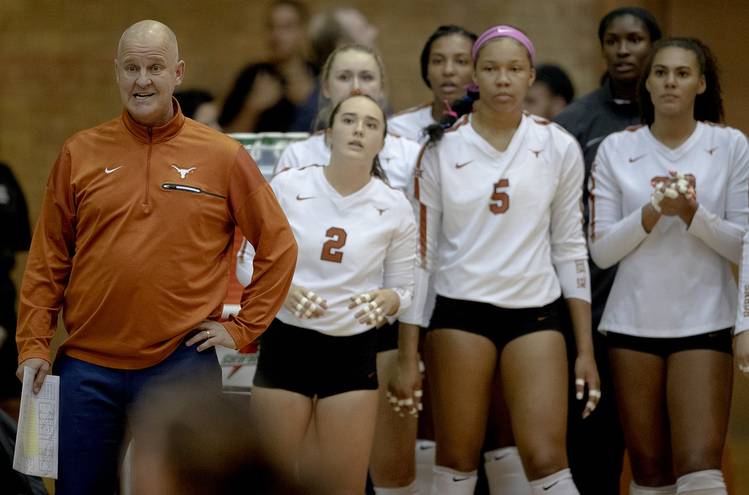 For the first time in over two seasons, Texas can no longer claim to be the top-ranked volleyball team in the Big 12.

Texas was ranked sixth when the American Volleyball Coaches Association released its weekly national poll on Monday. Texas had been ranked third in each of the AVCA’s three previous polls. The Longhorns’ past week, however, featured an upset loss at Rice and a sweep of Texas A&M.

Now sitting four spots above Texas is an undefeated Baylor program that was ranked fifth last week. Texas had been the Big 12’s top team in the AVCA poll ever since the final rankings were released in 2016. Since Nebraska left the conference following the 2010 season, 125 of the AVCA’s previous 130 polls had UT listed as the Big 12’s top-ranked team.

The Bears are now a program-best No. 2⃣ in the @AVCAVolleyball poll! #SicEm

Texas is 6-2 this season, and its two blemishes are five-set losses to Stanford and Rice teams that are currently ranked first and 22nd. (The AVCA ranked Rice for the first time in that program’s history on Monday). Texas will host Iowa State (9-3) in its Big 12 opener on Wednesday. Texas Tech (10-4) will be UT’s guest on Saturday afternoon.

This week, Baylor and Texas are the Big 12’s only representatives in the AVCA poll. Iowa State is the only other school from the conference that was listed on more than one ballot. Texas and Baylor were also the two teams that the Big 12 sent to last year’s NCAA tournament.

Will the national perception of the Big 12 hurt the Longhorns when the NCAA hands out its postseason seeding? Since Baylor and Texas are both highly-ranked, UT coach Jerritt Elliott didn’t seem to think so on Monday. Elliott noted that Iowa State and Kansas State (5-7) have combined for six five-set losses this year. He also said that Texas Tech’s 3-2 win over Ohio State on Aug. 30 was “good for our conference.”

“I think if you look around the country, all of the conferences are taking a lot of hits. Even the Big Ten has not won as many games,” Elliott said. “For us, it’s taking care of our conference. If we do that, then we’ll be in a (good) position.”

Longhorn Confidential: MRIs for everyone as Texas looks to get healthy during the off week