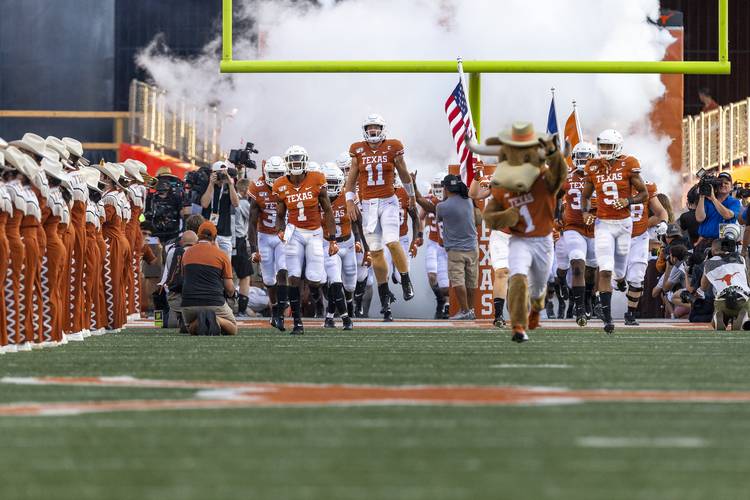 The Texas football team takes the field before a college football game at Royal-Memorial Stadium on Aug. 31, 2019. [Stephen Spillman for Statesman]

When Texas returns from its bye week, two more scholarship recipients will appear on the Longhorns’ roster.

Former walk-ons Hank Coutoumanos and Luke Brockermeyer have been placed on scholarship, the school announced on Sunday. The players were recently surprised at a team meeting. Following a presentation on how to tie a tie, the good news was revealed to Coutoumanos and Brockermeyer.

Coutoumanos is listed as a junior defensive back for the Longhorns. Brockermeyer is a freshman linebacker who redshirted in 2018.

Brockermeyer, who walked on at Texas after turning down scholarship offers from Oklahoma State and Rice, has appeared in two games during his college career. He is the son of Blake Brockermeyer, who was once an All-American offensive lineman for the Longhorns. Texas is also recruiting Brockermeyer’s younger brothers, Tommy and James.

Coutoumanos made his debut in last year’s 23-17 win over Baylor. He has also played in this year’s game against Rice.

Over the past few months, Texas has awarded scholarships to six of its walk-on players. During the summer, running back Mason Ramirez, linebackers Russell Hine and Cort Jaquess and long snapper Justin Mader were designated as scholarship players.