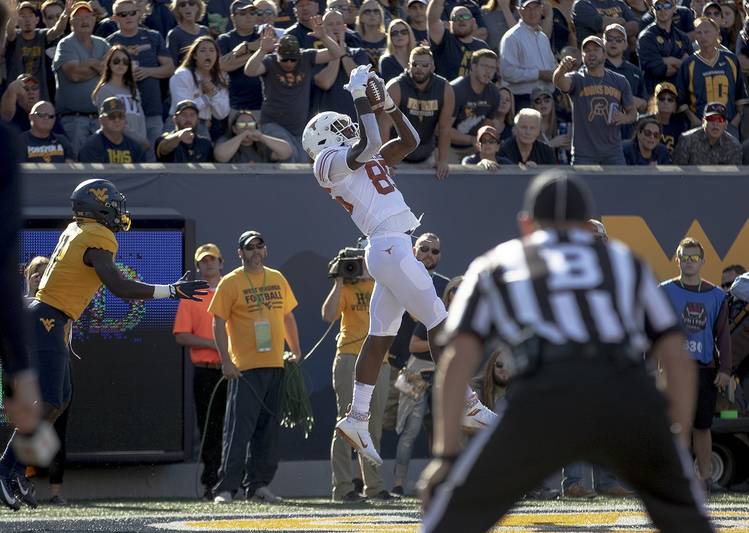 It’s halftime at Milan Puskar Stadium in Morgantown. No. 11 Texas, which is an 11.5-point favorite today, is leading West Virginia 21-14.

The Longhorns, already limping at running back and defensive back, have lost their starting running back and are struggling a bit in front of a sold-out crowd. The Mountaineers look like they’re game, the defense has give up 233 yards and penalties have been a real issue; Texas has been flagged six times for 55 yards.

Sam James is having a nice day for West Virginia. He hauled in a 44-yard touchdown — the second-longest scoring pass the Longhorns have given up this season — and returned a kickoff 30 yards.

1. Texas, in its first hostile environment road game of the season, is in a dogfight. Consider the Longhorns’ first drive: Keaontay Ingram was dropped for a 6-yard loss on the first play. Ehlinger had to make plays on four third-and-longs — including two third-and-very longs — before a sack led to Cameron Dicker’s 42-yard field goal try. He missed that.

So, on that drive: The running game sputtered, Ehlinger was sacked and Dicker missed a field goal. Oh, there was a delay of game penalty, too.

The Longhorns settled down after that drive, though.

2. How is that patchwork secondary doing?

Well, it certainly was a rough start. On West Virginia’s opening drive of the game, the secondary goofed on back-to-back-to-back plays — nickel back B.J. Foster, playing in his first game since getting injured against LSU, was flagged 15 yards for a personal foul on the first drive of the game. On the very next play, D’Shawn Jamison, getting the start at cornerback, got called for pass interference. Then, on the play after that, Foster got beaten for a 44-yard touchdown by Sam James. Never saw the pass coming in.

On WVU’s third drive, Foster was flagged for another personal foul — a targeting penalty, too. The targeting was reversed after a review, so he was ejected from the game. But he also was shaken up on the play, an open-field hit on running back Kennedy McKoy. Looked like a neck or shoulder stinger. He was replaced by Montrell Estell.

Early in the second quarter, Chris Brown hit T.J. Simmons after a catch, but did not tackle him; Simmons bounced out of it and went 44 yards to set up the Mountaineers’ second score of the game.

4. Ayodele Adeoye made a nice play on the Mountaineers’ second drive, tipping an Austin Kendall pass over the middle, then coming down with it for an interception in WVU territory. It set up Texas’ first score, Ehlinger’s touchdown pass to Epps.

5. Deja vu: Kendall scored on a first-and-goal from the 1 in the second quarter. He glided in untouched off the left side, on a quarterback keeper. Sure looked like Will Grier doing the same thing at the very end of last year’s 42-41 game in Austin.

6. Juwan Mitchell started at linebacker. … Collin Johnson is missing his third straight game with a sore hamstring. But his brother, Kirk Johnson, got some carries in the second quarter. … Cade Brewer’s had a nice half; he had a 25-yard catch and also put down a very nice block on on a running play.

7. About those punts. When we last saw the Longhorns, both Jake Smith and Brandon Jones muffed punts against Oklahoma State. On West Virginia’s first punt today, it was Jones lined up back there to return. He let it bounce at the 9; the Mountaineers downed it at the 1.

Smith, who has been the primary punt returner all season, hasn’t lined up to return a punt yet.

8. Near misses: Cameron Dicker showed some poor tackling technique on a kickoff and came close to being called for targeting. He wasn’t, but if he had, he’d have been ejected. … Likewise, B.J. Foster also nearly got ejected for targeting; he actually was called for the foul, but replays overturned it. … Brewer put the ball on the ground in Texas territory, but the play was ruled a non-catch. … Dicker has missed one field goal, WVU’s Staley has missed two.

What to watch for in the second half: Is Ingram done for the day? If so, all eyes on Roschon Johnson, the freshman quarterback-turned-running back.