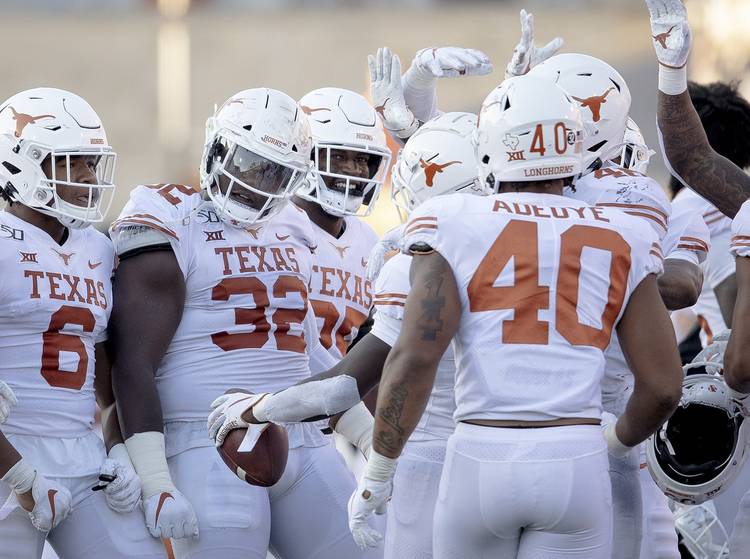 It’s all over at Milan Puskar Stadium in Morgantown. No. 11 Texas, which was a 10.5-point favorite today, has beaten West Virginia, 42-31.

This was a 21-17 game heading into the fourth quarter, when if felt like the Mountaineers were trending upward and the Longhorns were heading the other way. It had all the makings of another tight Texas-West Virginia game — think 42-41 last year, 24-20 in 2016, 24-16 in 2014, 47-40 in overtime in 2013 and 48-45 in 2012. But the secondary, riddled with injuries and question marks, produced a couple of impressive interceptions and the Longhorns were able to put this one away.

The Longhorns started slow, then heated up, then slowed down and then won it in the fourth quarter. Kudos to the defense, which produced four turnovers and helped spark the big fourth quarter. This was Texas’ longest road trip of the season, and the sellout crowd was largely quiet for most of the final quarter. Sam Ehlinger was solid, save for one specific third quarter pass, and Roschon Johnson had his finest game yet as he filled in for a nicked up Keaontay Ingram.

The Mountaineers started fast, then slowed down, then got hot again and then lost it in the fourth quarter. The Mountaineers’ three wins had come against the likes of James Madison, North Carolina State and Kansas, and while they hung close for three quarters, they cratered in the fourth. Neal Brown went curiously conservative late in the first half and that continued into the second. Sam James left the game at the end of the third quarter, robbing Austin Kendall of his biggest weapon.

Texas is off to a 2-0 start in Big 12 play and carries some momentum into next week’s Red River rivalry showdown with sixth-ranked Oklahoma. This was a real shot in the arm for the secondary, which is missing three key defenders but got some much-needed plays from D’Shawn Jamison among others. The Longhorns have scored 35 or more points in five straight games for the first time since the Mack Brown era. But how healthy are the Horns heading into the OU game?

1. About that patchwork secondary …: Down Jalen Green, Caden Sterns, Josh Thompson and DeMarvion Overshown, the Horns’ defensive backfield got off to a rough start — B.J. Foster, playing his first game since getting injured against LSU, had two personal fouls and was beaten on a 44-yard touchdown pass and Jamison, getting the start at cornerback, was flagged for a pass interference penalty. But things certainly changed in the second half; Jamison shut down WVU’s James and finished with two interceptions, and Foster had a nice pick as well to set up a touchdown.

2. About that Heisman candidate …: Ehlinger really threw just one bad pass — an underthrown deep shot to John Burt in the third quarter with three Mountaineers defenders in the area. Besides that, it was a solid day. Certainly not his best, but a good one. Ehlinger was 18 of 33 for 211 yards, 2 TDs and the one pick. He also rushed for 45 yards and two more TDs.

3. About that running game …: Keaontay Ingram left in the second quarter with a stinger, returned for a bit in the third, but finished the day with just 18 yards on 11 carries, averaging 1.6 yards. Roschon Johnson, however, kept the running game humming. He finished with 121 yards on 21 carries, an average of 5.8. Not bad for a freshman quarterback.

4. Game balls: Offense — Johnson keeps improving. He looked like a running back today, producing his first 100-yard game as a Longhorn. Defense — Jamison. A strong game for the cornerback.

Tips of the hat to Cosmi, Duvernay, Malcolm Epps and Cade Brewer on offense, and Ayodele Adeoye and Marqez Bimage on defense.

5. About those penalties …: Ugh. Lots of ’em for Texas, including costly ones of the personal foul variety. There were two near-targeting penalties called. In all, Texas had 10 for 89 yards.

6. About those third downs …: Texas entered this game ranked No. 2 in the country when it comes to converting third downs, a combination of having a quarterback playing at the top of his game, a solid offensive line and a dependable pass catcher to look for. The Longhorns, who converted 70% of their third downs in the first half, were 10 of 18 for the game.

This was the ninth matchup between the two schools, their eighth as Big 12 schools. Before that, their only meeting came in 1956, the year before Darrell Royal arrived.

The Longhorns and Sooners resume their Red River rivalry next Saturday at the Cotton Bowl. No. 6 Oklahoma started slow but cruised past Kansas today, 45-20. Texas and OU split their two games last year.

It’s halftime in Morgantown, and No. 11 Texas leads West Virginia 21-14