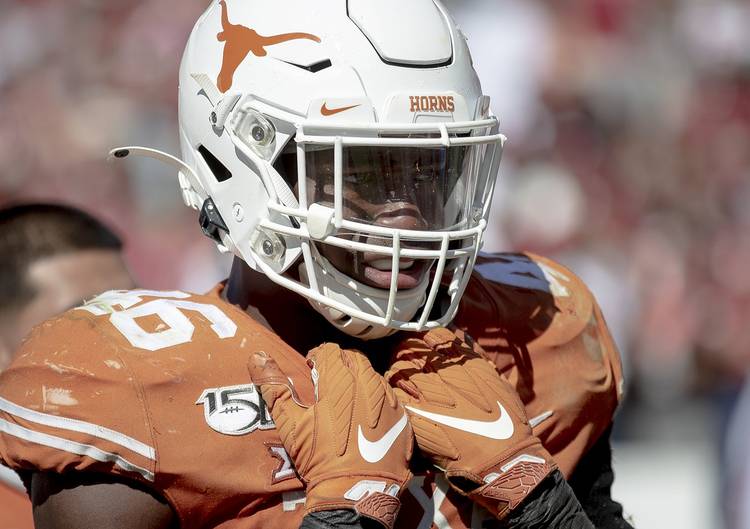 Texas linebacker Joseph Ossai (46) exits the field after losing to Oklahoma 34-27 in an NCAA college football game at the Cotton Bowl on Saturday, Oct. 12, 2019, in Dallas, Texas. [NICK WAGNER/AMERICAN-STATESMAN]

On potentially how to fix Texas pass rush and other items:

In the last two meetings with OU, Ehlinger has been sacked 12 times. The corner blitz by Tre Brown for a sack and a safety all but sealed Texas’ fate in the Big 12 championship game. … Should the Longhorns switch to a four-man front? Curious how linebacker Joseph Ossai would fare as an edge pass rusher. … Two encouraging stats: Texas still ranks third nationally in third down conversions at 54.4%, and the Longhorns are a plus-7 in turnover margin. Kansas ranks 116th in turnover margin at minus-5 and hasn’t recovered a fumble all season.

Players trying to move on from OU loss:

Texas players were very tight-lipped Tuesday in the aftermath of the loss to Oklahoma, and who can blame them? Quarterback Sam Ehlinger said those “emotions don’t help us the next week, so why carry on with it?” … To a question about his health and any rib or shoulder injury, Ehlinger disputed that there’s anything wrong with him. “I feel very content with how I feel.” … Nose guard Keondre Coburn raved about Kansas’ Pooka Williams Jr. “That dude is amazing. You think he’s tackled, he runs for 20 more yards. You’ve got to make sure we take him to the ground.” Sounds familiar.

Troy Tulowitzki is loving every minute of his new job as volunteer assistant for the Texas baseball team, which began practice on Monday with the fall World Series scheduled to start Nov. 16. It’s been pushed back later than usual so the team will have use of its new ritzy indoor development center that includes the Cliff Gustafson Pavilion. “Everybody who knows me knows I’m passionate about baseball,” Tulowitzki said. “I love this game.” He’ll be asked to beef up a Texas roster than hit only .250 and only had one hitter above .272. That would be center fielder Eric Kennedy, who hit .320 and was named MVP of the summer California League. Of Tulowitzki, Kennedy said, “He wants us to be big in the box and own it. Have some swagger and let everybody know you’re the best player.” Kennedy said he can’t wait to move into the new building and said it even has an omelette station. “And I’ve never even had an omelette.” Head coach David Pierce said it’s more a nutritional bar. … The team had workouts that began at 5 in the morning. That’s serious. … Tulowitzki said he doesn’t know if he wants someday to be a college head coach or a major-league manager. “I’m taking it year by year. I want to do a good job here. I’ll be able to answer that question later in my career.” Asked if new Longhorns student assistant coach and pitching great Huston Street can get him out, Tulowitzki said, “No. He was never able to get me out and still can’t.”

For the rest of Kirk’s 9 Things, including his thoughts on Austin’s newest pro tennis tourney, the NFL and mid-season All-Americans click here.

Golden: Is Texas football leadership in the right mental space?