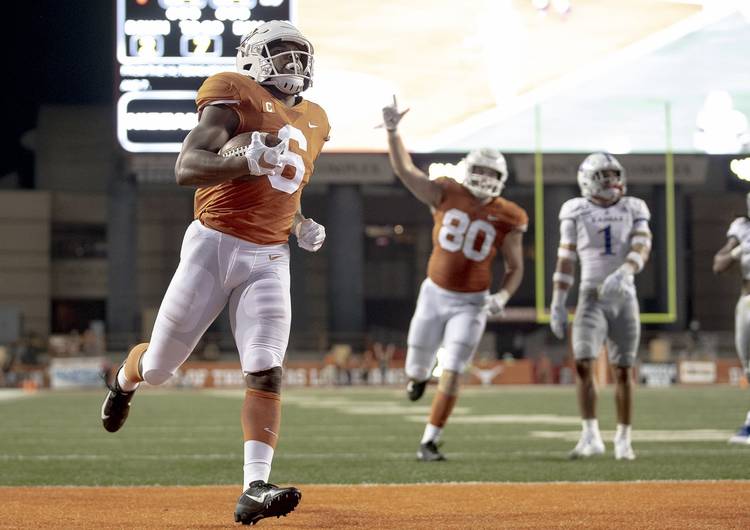 It’s all over at Royal-Memorial Stadium. No. 15-ranked Texas, which was a 21-point favorite tonight, has beaten Kansas 50-48.

That’s right. It took a last-second field goal from Dicker the Kicker to avoid a big, big loss.

This is how it ended:

There’s a reason why the Longhorns were favored by three touchdowns, but we didn’t see that much of a talent disparity on the field. The running game nearly produced two 100-yard rushers, Duvernay heated up in the fourth quarter with a pair of touchdown catches and in the end, the Horns had Dicker there to win it.

Consider this: The Jayhawks left seven points off the board on a missed field goal, a blocked field goal and a blocked extra point. And Andrew Parchment dropped what would have been a 36-yard touchdown with five minutes left. Pooka Williams nearly put 200 rushing yards on the Texas defense, but it wasn’t enough.

Depends on your school of thought. Certainly, this could have been one of those good-feeling victories because the Longhorns struggled and then pulled it off in the fourth quarter. But the fact that all of it came against the 2-4 Jayhawks? Gulp.

2. Pooka Williams is as explosive as the Longhorns should remember — he broke off a 57-yard touchdown run against Texas last year in Lawrence, and he had a 65-yard romp in the first quarter tonight. He rushed for 190 yards and a pair of touchdowns.

3. Keaontay Ingram got the start and had his second 100-yard game of the season. His 14th and final carry put him over the mark. He had 14 carries for 101 yards and a touchdown; Roschon Johnson had 11 carries for 46 yards and also scored.

4. Getting defensive: DeMarvion Overshown shined, breaking up a deep shot on KU’s opening drive of the second half, sacking Stanley to force a punt with 4 minutes left in the third quarter of a 24-24 game, and flashed with a pair of nice tackles in the first half. … Kobe Boyce had a big third-down pass breakup late in the first half, forcing a punt with Texas trailing 17-14. … Joseph Ossai blocked a kick. So did Malcolm Roach. And D’Shawn Jamison picked up that Roach block and returned it 98 yards for a game-turning play.

Next up for Texas: TCU