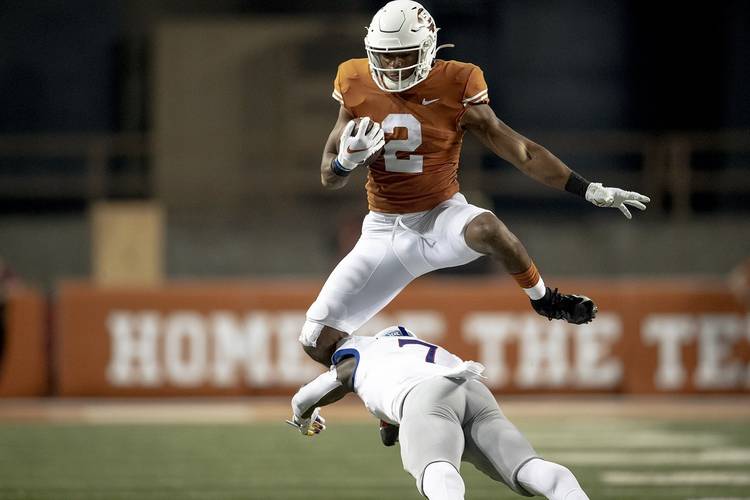 After a loss to Oklahoma last weekend, the Longhorns (4-2, 2-1 in the Big 12) will look to bounce back tonight against the Kansas Jayhawks (2-4, 0-3) in Austin. For live updates, photos and analysis from the American-Statesman’s Brian Davis, Danny Davis, Kirk Bohls and Cedric Golden, checkout our Gameday page below:

LIVE UPDATES: No. 15 Texas vs Kansas

For No. 15 Texas, mapping out a journey back to Arlington sounds easy, but will it be? https://t.co/8x9wZ30TEf pic.twitter.com/FHJC8Ja0Hp

Longhorns jumped out to an early 7-0 lead.

Touchdown Texas. Johnson goes straight up the gut for a room-service 14-yard touchdown. Rather easy.

Roschon out of the Wildcat. Then, Ehlinger to Eagles for 28 yards. Next comes RoeJo straight up the gut. Horns up 7-0. pic.twitter.com/V3rPsQz9Tk

A touchdown by Jake Smith extended the lead for Texas by two scores with 6:31 left in the first half.

Touchdown Texas. Or is it? Jake Smith scores on a 10-yard route. KU flagged for holding. That call is declined, and TD stands. Smith's 5th TD of the season. Horns up 14-0.

Kansas responded in the second quarter to make it a 14-10 game.

Touchdown Kansas. Pooka just glides through a group of Horns and gets in from 7 yards out. Texas' Foster also called for unnecessary roughness. Texas still leads 14-10.

The Jayhawks took a lead over Texas in Austin for the first time since 1997.

Touchdown Kansas. Stanley stands tough and delivers an 8-yard strike to Williams. Beats a full-house blitz. Now, the fans in this house are stunned silent. KU's first lead in Austin since 1997.

Texas regained the lead with 2:19 left in the half.

Touchdown Texas. Ehlinger looking every bit like Street in those 1969 unis. Hits Brennan Eagles for a 5-yard score, capping an up-tempo drive. Horns back in front 21-17.

Not sure what KU's Hasan Defense is supposed to do here. Brennan Eagles had inside position, essentially boxing him out, makes the TD grab. pic.twitter.com/8LWUkzugre

Kansas regained the lead in the third quarter.

The Longhorns started the 4th quarter with a score.

Duvernay's score gives the Horns a 7-point lead. And now, we get "Don't Stop Believin'" during the timeout. Cellphone lights galore during timeout. pic.twitter.com/7ZWTJrHTjY

A Sam Ehlinger interception led to another touchdown for Kansas but the Longhorns blocked the PAT and D’Shawn Jamison returned it for two points, making it a 33-30 game in favor of Texas.

PAT IS BLOCKED. D'Shawn Jamison returns the kick the other way for a 2-point conversion. Texas now up 33-30.

Credit Malcolm Roach with the PAT block. Jamison goes 98 yards the other way with a massive momentum swing for Texas. pic.twitter.com/vgvhxIt4EO

Pooka jooka'd his way to a TD but the Horns regained the moment on Malcolm Roach's blocked extra point and a 98-yard scoop and score by D'Shawn Jamison.

Touchdown Texas. Ehlinger with a quick-strike to Duvernay for 43 yards. This game is… wow.

And just like that, Sam Ehlinger hits Devin Duvernay for a 43-yard touchdown pass after a nice 19-yard run. That's called making up for a mistake in impression fashion.#Horns up 40-30 with 8:32 left.

Kansas hit a field goal to make it a one score game.

After a Texas fumble, the Jayhawks capitalized again on a turnover with a touchdown.

A big pass to Cade Brewer setup a touchdown run by Keontay Ingram to give the lead back to the Longhorns with 2:47 left.

Touchdown Texas. Ingram powers his way up the middle after a massive catch by Brewer to the Texas 3. Horns now back on top 47-40. 2:47 left. Long way to go with this defense.

Kansas rolled right down the field, scoring a touchdown and taking the lead on a 2-point conversion.

But the Longhorns orchestrated a drive that allowed Cameron Dicker to hit a game winning field goal.

Final in Austin: Dicker the Kicker saves Texas, Herman’s bacon with a game-winning FG at the horn. Texas wins 50-48. But this team has a lot of problems. A lot.

Not many happy faces headed to Texas locker room. This was a Matrix-style bullet dodge.

Texas soccer holds on for valuable road win over Baylor