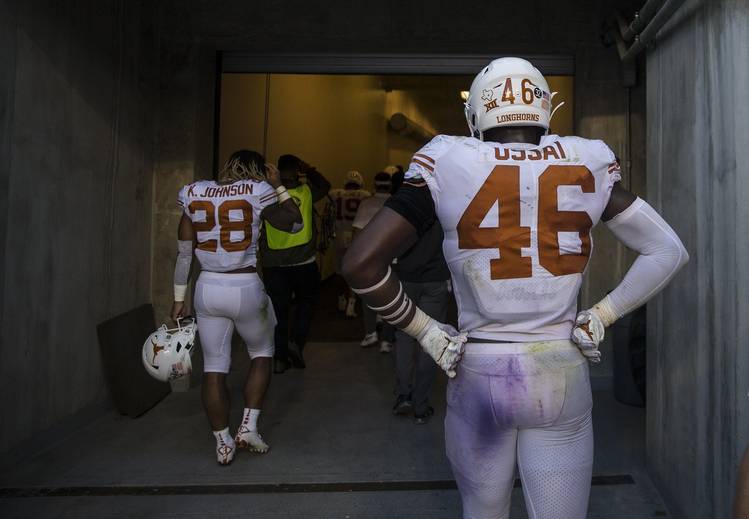 Texas Longhorns linebacker Joseph Ossai (46) walks back into the locker room after losing 37-27 to TCU Horned Frogs during an NCAA college football game at Amon G. Carter Stadium in Fort Worth, Texas [RICARDO B. BRAZZIELL/AMERICAN-STATESMAN]

The state of Texas football

Texas football was a fun watch not too long ago.

The Longhorns had a play-making quarterback in Sam Ehlinger, a nice stable of wideouts, some experience in the backfield and a defense that was purported in the preseason to be one of the fastest in program history. Ehlinger said the defense had a great chance to be elite.

Remember the LSU loss? Many of us chalked that up to the Longhorns playing against an amazing offense and a quarterback, Joe Burrow, who was as good as any in the country.

Turns out LSU is that good and Burrow is a serious Heisman Trophy candidate. But this defense has zero chance to be elite. It has become a nightmare, and now the unranked, 5-3 Longhorns get a whole off week to think about what needs to be fixed.

Watching parts of Saturdays’ 37-27 loss to TCU, we saw just the latest in what’s been a month of frustration for this defense. Watching Frogs quarterback Max Duggan hook up with Pro Wells for a 24-yard touchdown on a third-and-17 play reminded us of a brutal truth: The Horns have become star makers. Average quarterbacks are becoming world beaters because Texas is utterly incapable of getting stops.

No pass rush, no buzz, no energy, no wins.

Tom Herman owned it when he said, “We’re not good.” What else can he say? Tell us something we don’t know. Defensive coordinator Todd Orlando should thank his lucky stars for his agent because that $1.7 million salary is looking bigger and bigger as the losses start to pile up.

Over the last two games, Kansas quarterback Carter Stanley and Duggan have converted on 16 of 32 third downs against the Horns. Let that sink in.

Next up is Kansas State, which just put a real wrench in the Big 12′s chances of making the CFP with that 48-41 win over Oklahoma.

For the rest of Cedric’s Nuggets, including his thoughts on Dak Prescott and Deshaun Watson, visit here.