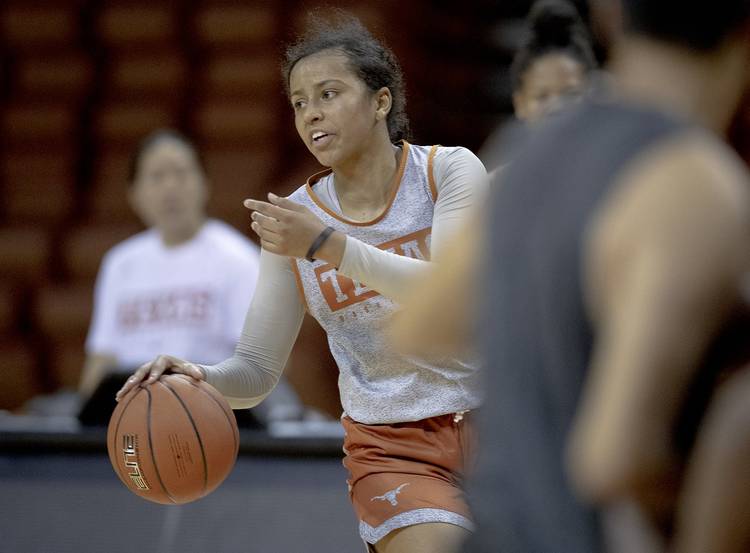 Texas will open its 2019-20 basketball season with a dozen names on its roster. The Longhorns, though, may be short-handed when they travel to South Florida this Friday.

Longhorn guard Sug Sutton (foot) and forward Joyner Holmes (ankle) began this week with day-to-day designations on the injury report. Sophomore Audrey Warren is currently in the concussion protocol. Texas coach Karen Aston told reporters on Monday that Warren will be “unavailable for an extended amount of time.”

Karisma Ortiz is also day-to-day, but the sophomore guard is healthy. Ortiz transferred to Texas from Penn State in May. She is still waiting for the NCAA to rule on her eligibility for this season. Aston expects a ruling to be made on Ortiz this week.

If Ortiz is eligible, Aston said the six-foot guard will “play and play a lot.” As a freshman at Penn State, Ortiz appeared in 30 games and made 24 starts. She averaged 3.6 points, 4.2 rebounds and 2.3 assists per game.

“She’s practicing like she’s going to play,” Aston said. “I’m impressed with that, first of all. Second of all, she came here to get better. She came here to make a difference on a team and regardless of whether that’s this year or next year, we’re going to make sure that she makes the most out of what her situation is.”

While Aston provided updates for Ortiz, Sutton, Holmes and Warren, the eighth-year coach had little to say about freshman forward Ashlee Hannan. Recruited out of Australia, Hannan was with the Longhorns when they started practicing last month but her name has since been scrubbed from the UT roster. Over the last two weeks, Texas has declined multiple requests for comment about the status of Hannan.

On Monday, Aston was asked three questions about Hannan. Aston said she was not allowed to comment on the queries of where Hannan was, if the player was still in school of if she was expected back this season.