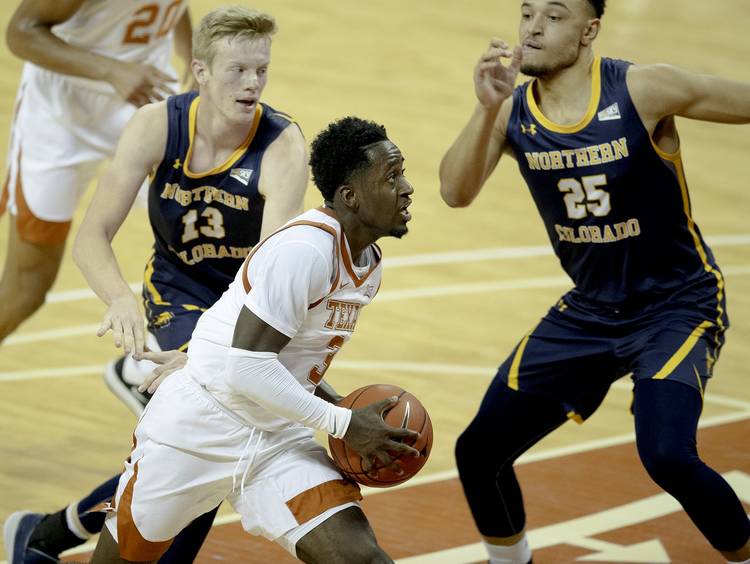 Texas guard Courtney Ramey (3) drives to basket during the first half of the team's NCAA college basketball game against Northern Colorado on Tuesday, Nov. 5, 2019, in Austin, Texas. (Nick Wagner/Austin American-Statesman via AP)

About the series: Texas leads the all-time series 3-1. The Longhorns won last year’s matchup at the Erwin Center, 72-68. Thankfully for UT, Carson Edwards now plays for the Boston Celtics. Edwards had 40 points and hit seven 3-pointers against the Horns.

About the Longhorns: Guard Courtney Ramey got his season off to a strong start with a double-double in the win over Northern Colorado. Ramey had 16 points on 8-of-17 shooting along with 10 rebounds. Matt Coleman III also had 10 points and pulled down six rebounds, a big offseason point of emphasis. This will be a huge test for UT’s frontcourt and a major challenge for Jericho Sims. The 6-foot-9 junior can thrive in various games, but the question is whether he can sustain a high level in consecutive games. Texas should get Gerald Liddell back after he missed the opener with a concussion.

About the Boilermakers: Coach Matt Painters’ team had two starters return from last year’s Elite Eight squad, Matt Haarms and Nojel Eastern. Haarms had seven blocks in Purdue’s season-opening win over Green Bay, which ranked fifth in school history. Newcomer Jahaad Proctor had an eye-popping 26 points in his Boilers debut, the most since Glenn Robinson poured in 30 in his first game in November 1992. Purdue enters Saturday with an 18-game home winning streak, the fifth-longest in the nation. What’s even more amazing, the club is 64-4 at home over the last four seasons. Texas will be the first Big 12 team to play at Mackey Arena since December 2004.