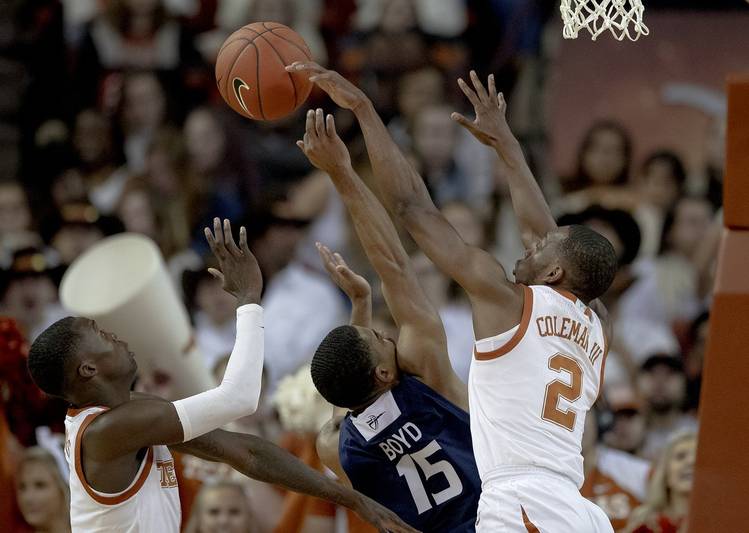 Texas coach Shaka Smart was pretty confident this was the best shooting team he’s had in five seasons. That may be the case eventually. But not on Tuesday.

The Longhorns shot 25% from 3-point range and had to work far harder than it should have been for a 67-54 victory over California Baptist. At times, the frigid weather outside the Erwin Center was like Cancun compared to the cold shooting on the floor.

The Longhorns (3-0) found themselves in a three-point game with 7:23 remaining. Down the stretch, Jericho Sims got active, getting a dunk and then another jam for a three-point play.

Sims finished with 11 points and 11 rebounds for his first career double-double, a huge positive step for a program that’s been waiting for him to find traction.

Courtney Ramey had a team-high 19 points, and Andrew Jones practically sealed it with a 3-pointer with 53 seconds remaining and then a run-out dunk. Jones finished with 11 points, and Matt Coleman III had nine.

Courtney Ramey wants to be the Longhorns’ leader. That means taking control when the situation calls for it. Ramey had just four points in a rather lackluster first half for everyone in burnt orange. But Ramey went wild in the second, starting 6-for-6 as the Horns built up a methodical 55-47 lead with 5:52 remaining. This came after Ramey had just one point in a win over Purdue.

This time, maybe the game ball should’ve gone to Smart. The coach was likely distressed — or furious — about the wild 3-point shot selection in the first half and ordered more straight-line drives at halftime. UT’s guards got the message, as they bypassed their defender and went to the rim. Texas opened the second half 5-for-6 shooting and pushed out a 13-point lead with 15:42 remaining.

So, about that first half, Texas should have been up by more than four points at the break. Cal Baptist shot 34.6% and made only three 3-pointers in the first 20 minutes. This was the same team that scored 93 and 112 points in its first two games. But Texas was 2-for-16 from 3-point range and shot 28.6% overall in the first half. The guards moved the ball so well in Saturday’s win over Purdue. But Texas had only three assists on 10 made field goals in the first half.

At some point, freshman Will Baker will learn this isn’t high school anymore. Baker, a 6-foot-11 big man from Westlake, was 0-for-6 shooting in UT’s first two games with four rebounds. Five of those were missed 3-pointers. Baker was 0-for-2 from 3-point range in the first half. He was wide open in the lane at one point and clapped for the ball. Courtney Ramey wouldn’t throw it to him. When things aren’t working, veterans know to go to the basket and make something happen.

Texas should be favored in Friday’s matchup against Prairie View A&M, a team that was 1-1 going into Tuesday’s game at Texas State. Last season, the Panthers started 1-11 playing mostly road games for paychecks and then went back home and won the SWAC. Coach Byron Smith’s team made the NCAA Tournament. Then, Texas is off to New York for two championship-round games in the 2K Empire Classic at Madison Square Garden on Nov. 21-22.