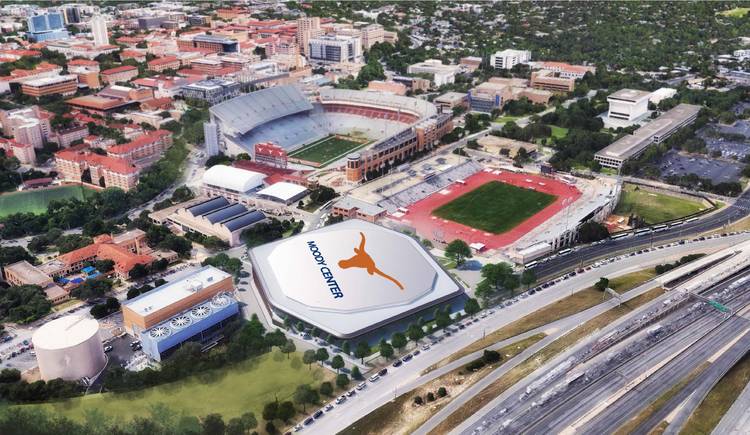 The Moody Center will be the name of the of Texas' new basketball arena in honor of a $130 million gift from the Moody Foundation, the university announced Saturday. (Courtesy University of Texas)

The University of Texas will hold a groundbreaking party and concert Dec. 3 for its new Moody Center arena.

The event, which begins at 4:30 p.m., is free and will include a concert at 5:30 p.m. by Moon Taxi and free food for all attendees. Anyone in attendance may also claim a free ticket to the 7 p.m. Texas men’s basketball game against the University of Alabama-Birmingham following the concert.

RELATED: After $130 million gift, the University of Texas to name new basketball arena for Moody family

Those interested should RSVP in advance online at TexasSports.com/promos using the code MOODY.

UT’s famed mascot, Bevo XV, will be available for photo opportunities along with Texas Cheer and Pom from 4:30-5:30 p.m.

Fans may park for free in the Manor Garage at the corner of Robert Dedman and Clyde Littlefield drives. Due to construction of the Moody Center along Red River Street and Martin Luther King Jr. Boulevard, fans are encouraged to access the event from the north side of campus at Robert Dedman Drive and Dean Keeton Street.

In December 2018, UT and a group led by the Oak View Group announced plans to build a new arena on campus to be home to Texas men’s and women’s basketball games, graduations, concerts and other events for the Austin community.

The Moody Center will replace the 42-year-old Frank C. Erwin Jr. Center, which will make way for the future expansion of the Dell Medical School.

Georgetown knocks off No. 22 Texas with second-half run