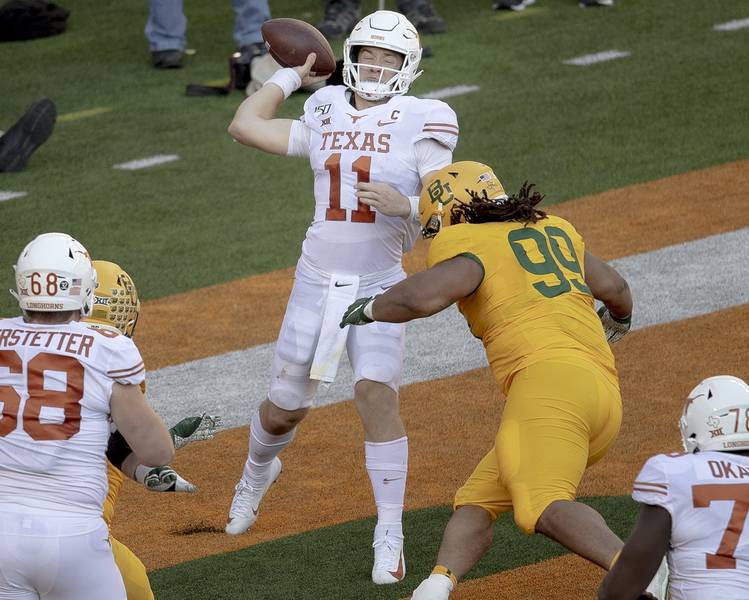 The Longhorns (6-4, 4-3 in the Big 12) are on the road in Waco to take on No. 14 Baylor (9-1, 6-1). For live updates, photos and analysis from the American-Statesman’s Brian Davis, Danny Davis, Kirk Bohls and Cedric Golden, checkout our Gameday page below:

We have questions. Will the Longhorns and Bears have any answers?https://t.co/h33bnJwAbt #HookEm pic.twitter.com/VXrmKWeDV7

Texas announces that WR Collin Johnson and DB B.J. Foster will not play today vs. Baylor. I’m betting that’s a wrap for Johnson’s season, too.

Some pregame reading ahead of Texas and Baylor's 109th meeting:

After neither side scored in the first quarter, Baylor found the endzone quickly in the second.

John Lovett, behind two lead blockers, bulls his way over from 28 yards out for a 7-0 Baylor lead.

A 68-yard run by Keaontay Ingram setup a a 48-yard field by Cameron Dicker to make it a 7-3 game at halftime.

Keaontay Ingram's 68-yard run was the longest for a Longhorn since D'Onta Foreman went 74 yards against Texas Tech in 2016. #HookEm

Dicker, the kicker, probably cut it closer than he wanted but it's good. Herman pumped. Or, relieved? Baylor up 7-3 at the break. pic.twitter.com/RL9TWqg9zE

PHOTOS: Texas gets on the board just before the half, down 7-3 to Baylor. https://t.co/DTvsWJ5SHF

Ingram was ruled out for the rest of the game after suffering an injury on that long run.

Texas annonces that RB Keaontay Ingram (ankle) is out for the rest of the game. Got hurt on the 68-yard run.

Touchdown Baylor. Charlie Brewer takes a shotgun snap, follows his blocks and just soars into the end zone for the score. Pretty easy drive for the Bears, now leading 14-3.

Touchdown Baylor. Brewer with a nice shot to Mims, who has a mismatch on Jamison. Mims climbs the ladder and hauls it in. Bears go up 21-3. 1:20 left in 3Q.