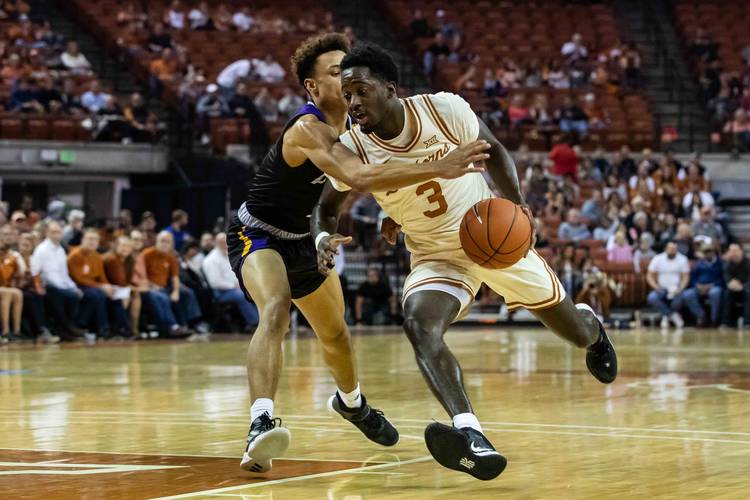 Courtney Ramey (3) during the Prairie View A&M Panthers at the Texas Longhorns at the Frank Erwin Center in Austin on Friday, November 15, 2019. [LOLA GOMEZ / AMERICAN-STATESMAN]

About the Longhorns: After six games, Texas finds itself at the bottom of the Big 12 in offensive rebounds. Coach Shaka Smart is asking every one of his players to get on the offensive glass. He’s imploring players to attack with violence. “Football is thought of as a violent game,” Smart said. “But basketball is also a game where if you can play with controlled violence, it can really work in your favor.” After splitting two games in New York, Texas fell out of the Associated Press Top 25 men’s basketball poll. One of the best aspects about a win over California was Texas had a season-low five turnovers. G Courtney Ramey also had 16 points in two games, a bounce-back of sorts after he was held scoreless against Prairie View A&M.

About the Cowboys: Coach Heath Schroyer’s club has already made some big road trips and taken some lumps early. McNeese State lost at Western Michigan, Wisconsin and Richmond. Shamarkus Kennedy from Tuscaloosa, Ala., has boosted his totals from last season and is shooting 66.7% from the floor. Nobody in burnt orange should take the Cowboys lightly, especially after watching Stephen F. Austin taken down No. 1 Duke this week. “Should we have beaten Georgetown (in New York)? On paper, you might say we should. Georgetown felt like they should have won,” Smart said. “That’s been a huge message to our players. Guys, if we go by should, we’re going to have some problems. It’s all about what you go do.”

For one day, all looks right again in Texas’ 49-24 win over Texas Tech