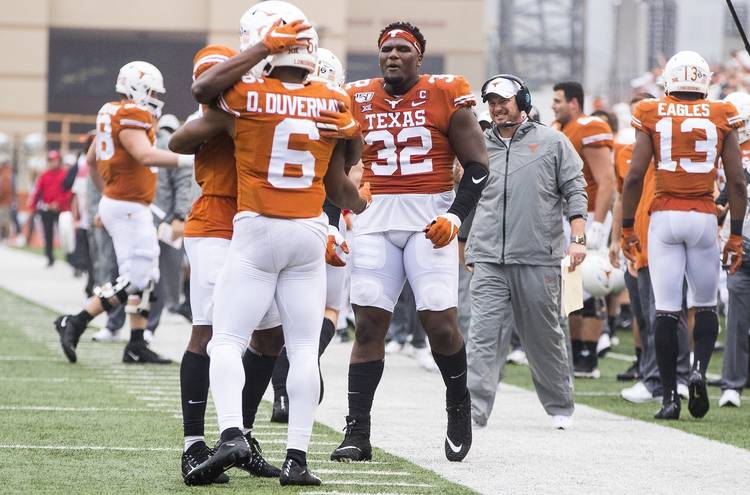 It’s all over at Royal-Memorial Stadium. Texas, which was a 10-point favorite today, has beaten Texas Tech, ending the regular season and saying goodbye to its outgoing seniors with a 49-24 win.

Playing in cold and rainy conditions that reminded us of the 2015 win over Kansas State, the Longhorns looked generally uninterested while falling behind 14-0 in the first quarter but then turned it on offensively and clamped down defensively in the second half. For one day, anyway, all looked right again for a team that really has been dragging for the last month.

As sluggish as the Longhorns looked on both sides of the ball in the first quarter, things turned around for both. The defense gave up the yards (470) but produced a goal-line stand and a couple of costly turnovers. The offense produced seven touchdowns and 610 yards — the second-best output of the season and the first 600-yard game since the win over Kansas; it had scored seven touchdowns in the three previous games. For whatever reason — we’re crediting Malcolm Roach’s sack to close the first quarter — the Horns woke up in a big way, came from behind a 14-point hole, took charge to lead at halftime, put it away in the third quarter and cruised in for the win. When Casey Thompson is playing the last third of the fourth quarter because you simply want him to get some snaps, that’s a good thing.

The Red Raiders have had some close-call losses in Matt Wells’ first season, but couldn’t sustain their quick 14-0 start. Jett Duffey had success picking apart the Texas secondary, but also took some ill-timed sacks and the Raiders struggled on fourth downs, going only 1 of 4. That included two failed fourth-down passes into the end zone. Not having Jordyn Brooks, Tech’s Butkus Award finalist who’s facing shoulder surgery, really hurt.

Well, for starters, 7-5 sounds and feels a whole lot better than 6-6, especially when you consider that the Longhorns had lost three of their last four games and had to earn that one win in there with a walk-off field goal. Texas now waits for its bowl invitation; we’ll find out next Sunday whether the Horns will end up in the Camping World Bowl or the Liberty Bowl or the Texas Bowl. Spending the next several weeks looking forward to the extra practices and the bowl will be a lot easier knowing the offense looked like it did back in September and the defense made some plays.

1. In the quarterbacks matchup, Sam Ehlinger gets the nod. He was 19 of 27 for 348 yards and a pair of touchdowns and added 83 yards and another score in the running game. Duffey was 35 of 57 for 398 yards and two touchdowns. He was sacked four times and lost a fumble.

2. Collin Johnson and Anthony Cook missed the game with injuries. Keaontay Ingram, who was questionable with a bad ankle, was able to play but was generally ineffective. At one point or another, safety Caden Sterns, linebacker Jeffrey McCulloch and running back Roschon Johnson all left the game, but they each returned.

3. Texas won the end of the first, second and third quarters. And each one was important:

5. It’s senior day, the final home games for guys like Collin Johnson and Devin Duvernay and Zach Shackelford and Brandon Jones and Malcolm Roach. Which seniors went out strong?

Next up for Texas: A bowl game

But which one? Maybe the Camping World Bowl in Orlando on Dec. 28 against an ACC team? Or the Liberty Bowl in Memphis on Dec. 31 against a SEC team? Or another Texas Bowl in Houston on Dec. 27? Texas will find out next Sunday, on Dec. 8.