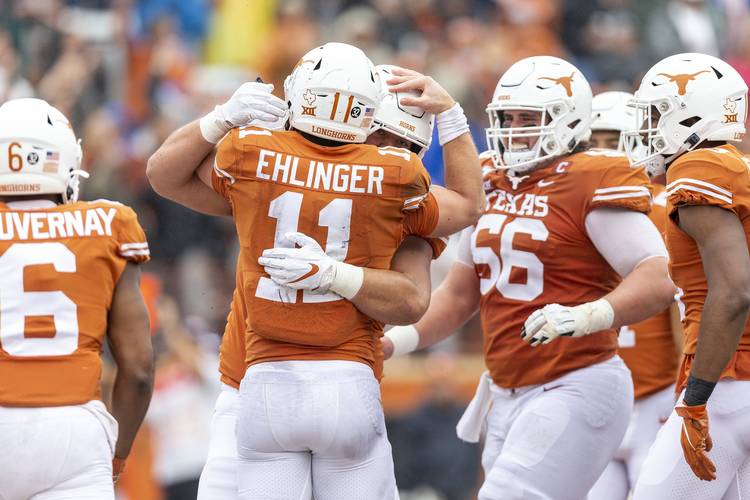 Texas Longhorns offensive lineman Zach Shackelford (56) celebrates the touchdown by quarterback Sam Ehlinger (11) in the first half of an NCAA college football game on Friday, Nov. 29, 2019, in Austin, Texas. [Stephen Spillman for Statesman]

It’s halftime at Royal-Memorial Stadium. Texas, which is a 10-point favorite today, is leading Texas Tech, 28-21.

It’s cold and rainy, and the Longhorns — who have dropped three of their last four games, will play in a lesser bowl game and have slogged their way out of Big 12 championship contention down the home stretch — started slowly, fell behind by a couple of touchdowns and looked like they were content to say goodbye to their seniors with a yawn. But things have turned around and this at least looks like Texas has gone from a disturbing end-of-season no show into finding reasons to win this one.

There have been plenty of big plays, from 30-yard Jett Duffey and Sam Ehlinger completions to Devin Duvernay’s historic 100th catch of the season — a 75-yard touchdown. The much-maligned defense has an impressive goal-line stand, Tech is down its best defensive player as well as its starting running back but Texas is down one of its top offensive stars as well as two starting cornerbacks.

The road team has won the last five games in this series. Texas is going to end the regular season either 7-5 or 6-6, and given the way the past month has gone, 7-5 sounds a lot better than 6-6.

1. Texas, down 7-0, drove to Texas Tech’s 24 when the Horns decided to go for it on fourth-and-1. Ehlinger was stuffed on his sneak attempt for no gain. After Roschon Johnson was tripped up on third down, the Horns went with the hurry-up effort to try to get Ehlinger up the middle. But the only line push was the one going back.

2. Collin Johnson is out again with his bad hamstring. Maybe for the bowl game?

3. With Johnson not playing, Ehlinger worked early passes to several receivers, getting them involved from the start. Devin Duvernay, with three catches for 128 yards and a touchdown, is not surprisingly leading the way, but Brennan Eagles (2-15), Malcolm Epps (2-42) and Jake Smith (1-11) all are contributing. In all, seven different Longhorns have caught a pass.

4. Starting cornerbacks Jalen Green and Anthony Cook are out with injuries, too. And Caden Sterns was shaken up at the end of the first quarter. Seemed to be a rib injury; he was fitted with a brace and was back on the field for Tech’s next offensive drive..

5. Two of the first three plays were Sam Ehlinger runs — an 11-yard gain and a 7-yard keeper — but the fourth snap for Texas was a sack. That was the 33rd sack of the season allowed by Texas, which is the worst in the Big 12. That’s been the lone sack of the day for Tech. Texas has two.

6. Keaontay Ingram, bad ankle and all, got the start and recorded a carry and a catch on the first drive. He’s had only two carries, though, for 17 yards. Roschon Johnson has 12 carries for 52 yards and the touchdown, and Ehlinger has run it eight times.

7. Johnson injured his left leg, maybe his left knee, after getting rolled upon at the end of a hard-fought 10-yard gain. He was helped off the field by a couple of trainers. Daniel Young, who scored a touchdown last week, replaced Johnson and scored his latest short touchdown.

Johnson was back in the game on Texas’ next drive.

In the quarterbacks matchup, Ehlinger is 11 of 14 for 218 yards and a touchdown.

9. Texas Tech linebacker Jordyn Brooks is out with a hurt shoulder, and it looks like the Butkus Award finalist may be out for the rest of the season. He may have surgery within the week. That’s a big loss. The Raiders also saw SaRodorick Thompson leave with 12 minutes left in the half.

Roach also made a nice goal-line stop on third-and-goal from the 1, on UT’s second-quarter goal-line stand.

Texas, which won the opening coin toss, chose to receive to start the game. So Texas Tech will get the ball to open the third quarter.

For one day, all looks right again in Texas’ 49-24 win over Texas Tech