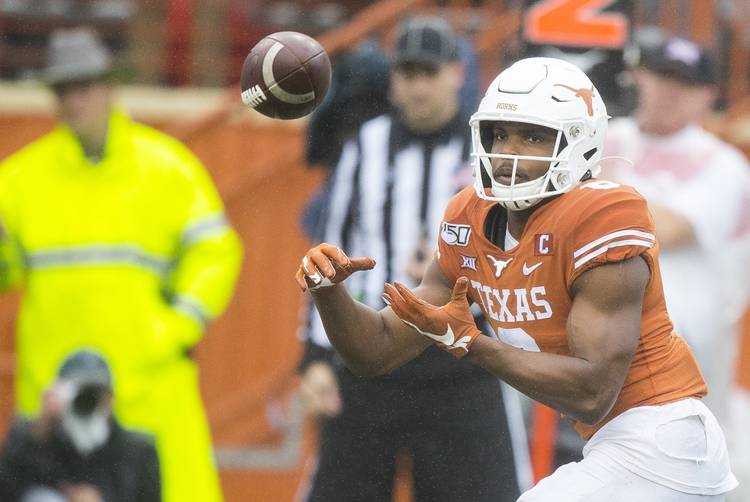 Texas senior receiver Devin Duvernay and freshman running back Roschon Johnson have both been applauded for how they closed out the regular season.

Duvernay was named the Big 12’s offensive player of the week on Monday. Meanwhile, Johnson was honored as the conference’s top newcomer. This marks the second time that both players have won those awards.

He caught 6⃣ passes for a career-high 1⃣9⃣9⃣ yards and a touchdown.

His 199 receiving yards rank 𝘁𝗵𝗶𝗿𝗱 in @TexasFootball history and were 𝘁𝗵𝗲 𝗺𝗼𝘀𝘁 for a Longhorn since 2009.

In his second 💯-yard rushing game of the season he:

In a 49-24 win over Texas Tech on Friday, Duvernay led the Longhorns with six receptions, 199 receiving yards and a two-point conversion. Duvernay’s third catch against the Red Raiders — which turned into a 75-yard reception — was his 100th of the season. Only three Longhorns have caught 100 footballs in a single season.

Johnson, who switched positions this fall after signing with Texas as quarterback, rushed for 105 yards against Texas Tech. Johnson also scored on three of his 23 carries.

Texas closed out the regular season with a 7-5 record. The Longhorns are awaiting their invitation to a bowl game.