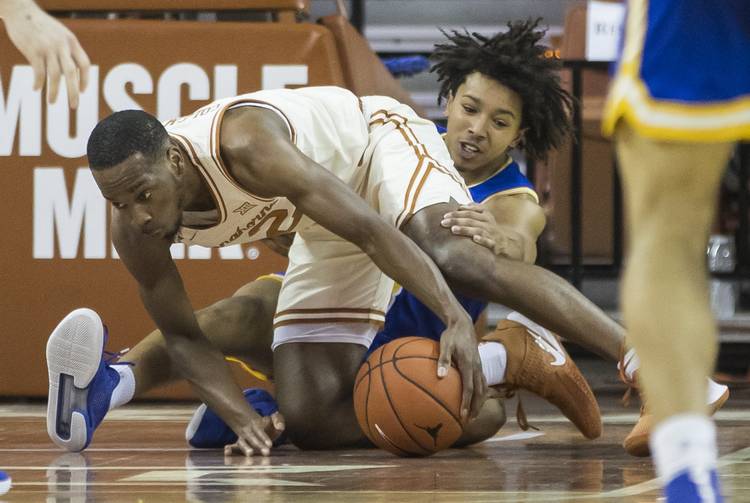 Texas Longhorns guard Matt Coleman III (2) fights for the loose ball on the floor with McNeese State Cowboys in the first half of a NCAA basketball game at the Frank Erwin Center, Saturday November 30, 2019. [RICARDO B. BRAZZIELL / AMERICAN-STATESMAN]

About the Longhorns: In November, coach Shaka Smart’s club got off to the best start in his five seasons. Smart said the Horns “showed glimpses of who we can be as a team and who each of them can be as individual players.” Now, Texas must do it consistently for 40 minutes. Coleman (career-high 51.5 FG%) is proving himself to be Texas’ clear floor leader. Others have bouts with inconsistency. Before the game, Texas officials will hold a ground-breaking ceremony for the new Moody Center at 5 p.m. Admission is free in the parking lot just south of Mike Myers Stadium. “I think it’s such an unbelievable game-changer for Texas basketball, both men’s and women’s,” Smart said. The new arena is scheduled to open for the 2022-23 season.

About the Blazers: UAB hit eight of 16 3-pointers last Friday but had trouble with Kentucky’s length and ultimately lost 69-58 at Rupp Arena. “I thought protecting the rim is one of the team’s strengths,” coach Rob Ehsan said afterward. “We told our guys, mentally calm down when you get in there and try to finish, but it’s hard when you have those guys coming at you.” Texas will likely try to fluster UAB’s shooters again with length from Sims and 6-foot-11 freshman Kai Jones. Benjamin had a good night against Kentucky. The freshman tied his career high with 19 points and went 4-for-5 from 3-point range. He’s finished in double figures in every game but one this season.