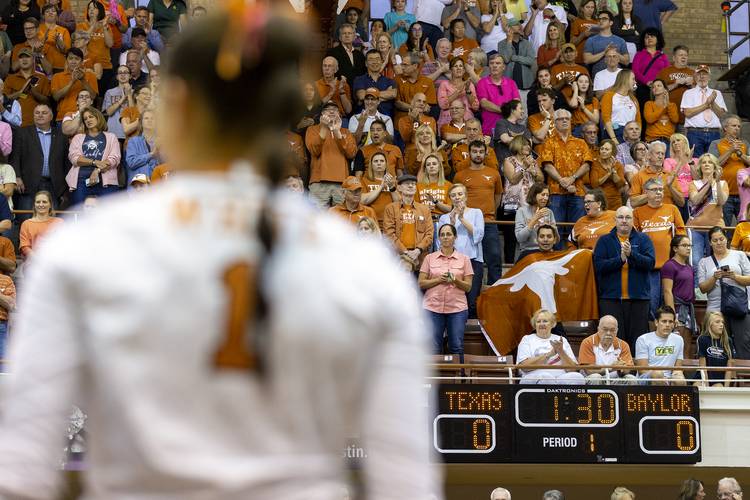 Texas fans cheer as outside hitter Micaya White (1) is announced before a Big 12 volleyball match at Gregory Gym on Oct. 23, 2019. [Stephen Spillman for Statesman]

For the last time, Texas senior Micaya White has climbed to the top of the Big 12’s weekly awards stand.

White, an outside hitter for the Longhorns, was named the Big 12’s offensive player of the week on Monday. White has won this award three times this season and five times over the past two years.

Texas only played once last week, but White led the Longhorns to a 3-1 win at Iowa State on Saturday. On a season-high 56 attempts, White registered 18 kills and a .304 hitting percentage. Texas secured a share of the Big 12’s championship with the victory. Two days after that match, UT was also named the second overall seed in the NCAA Tournament.

Following the revelation of the NCAA’s postseason bracket, Texas coach Jerritt Elliott said that White’s on-court play wasn’t her only contribution in the Iowa State match. The Longhorns were beaten 25-23 in the opening set. After the loss, White made sure that her voice was heard.

“Caya’s never wanted to be our leader, but last night in game one, she came in and said some real pointed things with good purpose,” Elliott said. “Nothing that was inappropriate but just kind of challenged the team and like, hey, let’s focus on what we need to do. That helped us out a lot.”

On Thursday, Texas will welcome Albany to Gregory Gym for the opener of its 36th appearance in the NCAA Tournament. Over UT’s last three first-round matches, White has accumulated 31 kills.