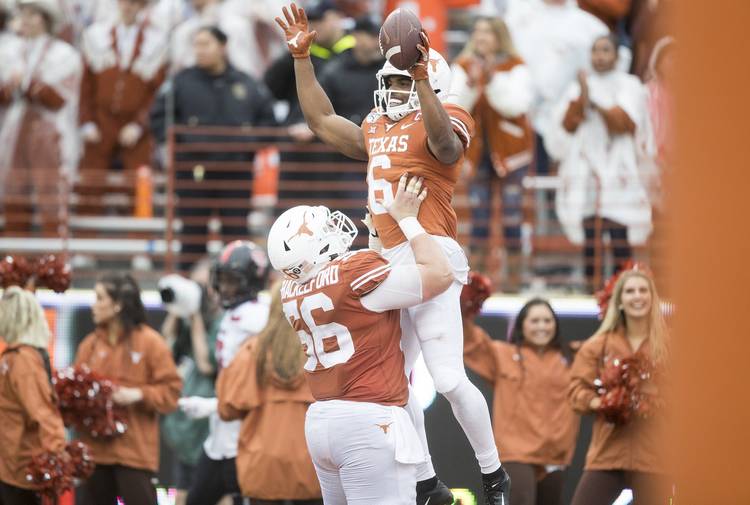 Texas receiver Devin Duvernay celebrates a touchdown with offensive lineman Zach Shackelford during a the Longhorns' win over Texas Tech in 2019. [RICARDO B. BRAZZIELL/AMERICAN-STATESMAN]

The Big 12 announced on Wednesday that only four Longhorns had seasons worth recognizing on the conference’s honor roll.

Senior receiver Devin Duvernay and offensive lineman Zach Shackelford earned first-team accolades on the Big 12’s all-conference team. Duvernay’s 103 receptions lead the country and no receiver in the Big 12 has accumulated more than his 1,294 receiving yards. Shackelford, who was a second-team honoree in 2018, started in all of UT’s games this season.

The Longhorns won seven of their 12 games in the regular season. With a 5-4 mark in conference play, Texas is tied with three other teams for third place in the Big 12’s standings.

In July, Texas claimed four of the 30 names on the Big 12’s preseason team. Of those players, only Shackelford made the cut at the end of the regular season. UT junior quarterback Sam Ehlinger was picked to win the award that was eventually earned by Hubbard.