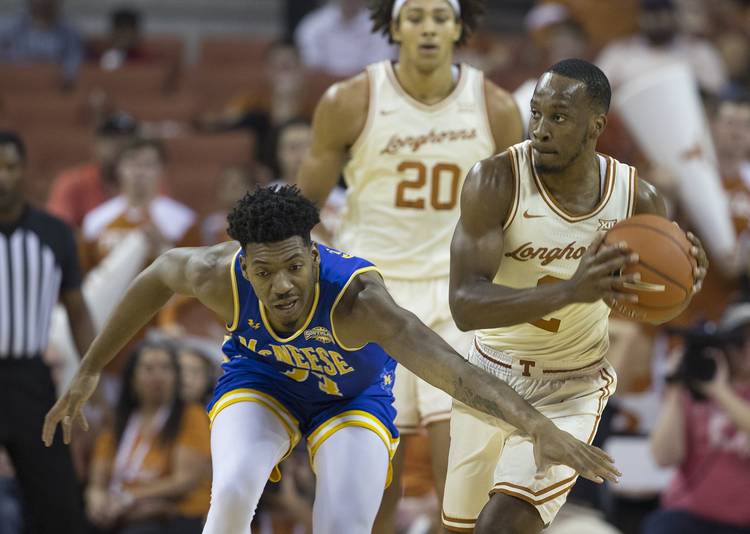 About the series: Texas leads the all-time series 137-86. The Longhorns won an exhibition on Oct. 25, 2017, in a game at Rice meant to help raise funds for Hurricane Harvey relief. But they have not played a regular-season game since Nov. 25, 2015, in the Battle 4 Atlantis tournament in the Bahamas.

About the Longhorns: Coleman, coach Shaka Smart’s long-coveted leader, is off to the best start of his career. He’s averaging new career highs in points (13.8), 3-point shooting (50%) and assists per game (4.9). “I thank my teammates for just believing in me and having the maturity and the character to hold me accountable as well,” Coleman said. “Now it’s just me and my mindset. I’m a junior now, playing carefree and all i want to do is just win.” Jones was careful to say “the floodgates aren’t officially open” even though he made a career-high six 3-pointers against UAB. Jase Febres was 1-for-4 beyond the arc and had a quite night. “Once everybody gets that rhythm and start really gelling as a group, it’s going to be fun to watch,” Jones said.

About the Aggies: A&M is and forever will be a football school. But it’s also a place where the basketball coach has to hustle to generate excitement, something women’s coach Gary Blair has long perfected. Men’s coach Buzz Williams has not generated much excitement in his first season. A&M had two of the smallest crowds in Reed Arena history in November. The roster has been depleted with injuries and junior guard TJ Starks left the program. A&M is currently on a three-game losing streak, having lost to Harvard, Temple and Fairfield. It’s not exactly what A&M leaders had in mind when they lured Williams away from Virginia Tech with a six-year contract worth $24 million.

Longhorn Confidential: How do the recent coaching changes at Texas impact recruiting?