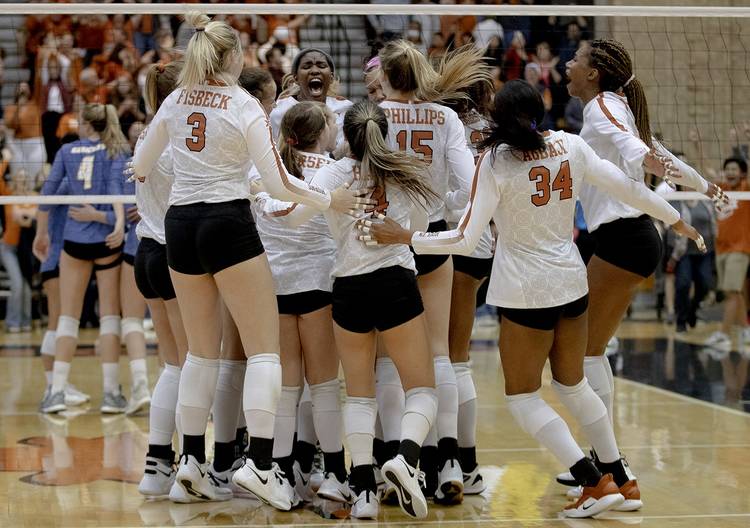 Texas celebrates its 3-2 win over UC Santa Barbara in the second round of the NCAA Tournament on Dec. 6, 2019 in Austin. [NICK WAGNER/AMERICAN-STATESMAN]

During a second-round match against UC Santa Barbara this past Friday, former Texas All-American Khat Bell exited the stands to give the Longhorns a pep talk.

Bell was a member of UT’s 2012 championship team. She is, however, not currently employed by Texas.

Bell later told the American-Statesman that “It’s important to have someone that has come before them to inspire them and let them know that I’ve been here before and I know how to get there. I told them that right now, we’re a little messy with a few individual plays, but it’s time to come together as a team and put the game away.”

Bell entered the Texas huddle between the third and fourth sets. UT trailed 2-1 at the time but rallied to beat the Gauchos in five sets.

Khat Bell comes in from the stands to talk to the team between sets.

Texas down 2-1 against UCSB. pic.twitter.com/CJjv1ICf4q

The appearance of Bell in the UT huddle instantly became a talking point online. As of Thursday afternoon, a thread on the popular message board Volleytalk had over 800 posts about the incident. A second thread had 84 responses. Some defended Bell while others wondered if she had violated NCAA rules.

Speaking at a press conference on Thursday, Texas coach Jerritt Elliott had mixed feelings about the pep talk. Elliott said he did not see Bell on the floor and was instead worrying about substitution patterns. Elliott was glad to see that kind of enthusiasm from a former player, but he also felt that Bell’s actions were inappropriate.

It happened so fast, I didn’t even realize until after the match that she went into the huddle and talked to them. Obviously, there’s going to be great reaction to it. Obviously, we didn’t want it to happen. But to me, it’s what college athletics is about too a little bit. Not that it was, again, something that was appropriate, and I wish someone would have stopped her to get on the bench area. To see that you have an alumni that actually cares that much, (the current players) don’t get to see it, but all of our alumni reach out and they’re passionate about it. I think that hit home with them a little bit, that one of them that has actually walked before them cared so much. It was a unique situation that will never happen again.”