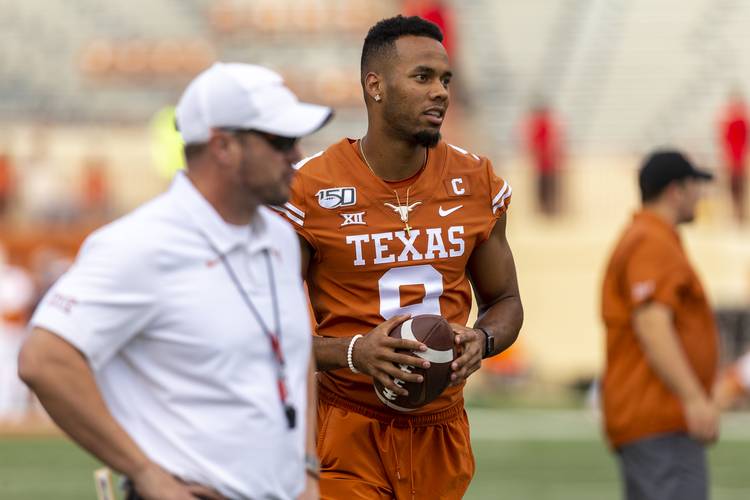 SAN ANTONIO — With three days to go before the Alamo Bowl, Texas held a practice on Incarnate Word’s campus. The media was granted access to a portion of Saturday’s drills.

Upon the team’s arrival on Friday, Texas coach Tom Herman gave positive updates about the playing statuses of wide receiver Collin Johnson and tight end Cade Brewer. A day later, both practiced and worked out with the first-team offense.

Brewer hasn’t played since he injured his ankle in a loss at TCU on Oct. 26. He is responsible for 10 of the tight end position’s 12 receptions.

When it comes to quarterback, there wasn’t much news of interest for UT fans. It was business as usual for junior Sam Ehlinger and his backup, redshirt freshman Casey Thompson.

It should be noted that walk-on quarterback Sam Saxton is no longer on the roster. Saxton, who had the duties of a third-string quarterback throughout this season, announced earlier this month that he’s transferring to Stephen F. Austin. Roschon Johnson, the freshman running back who has expressed a desire to move back to the quarterback position, was seen taking snaps during a drill designed for the offensive linemen.

Two quarterbacks were spotted in black No. 1 jerseys Saturday. Utah’s Tyler Huntley wears No. 1, so it is likely that at least one of those players has been tasked with emulating Huntley on Texas’ scout team. The 6-1, 205-pound senior has thrown for 2,966 yards, rushed for 257 yards and accounted for 23 touchdowns.

Texas freshman Ben Ballard ditched his No. 16 jersey and was wearing Huntley’s number. A walk-on who attended Austin Hyde Park Baptist, Ballard checks in at 5-11 and 195 pounds.

Ballard has not played this season but was twice honored by the American-Statesman’s high school department last season. He was given a “game ball” after he threw for 276 yards and four touchdowns in a win over Houston St John’s. He also was recognized after a three-touchdown performance against St. Michael’s.

Among those practicing were punter Chris Naggar and offensive lineman J.P. Urquidez. Both juniors have entered the transfer portal and plan on playing elsewhere as graduate transfers in 2020. It appears, though, that Urquidez will continue to be used on special teams in the Alamo Bowl. On Saturday, Naggar worked as the scout team’s punter.

Former receivers coach Corby Meekins also was at practice. He was recently moved into an administrative role.