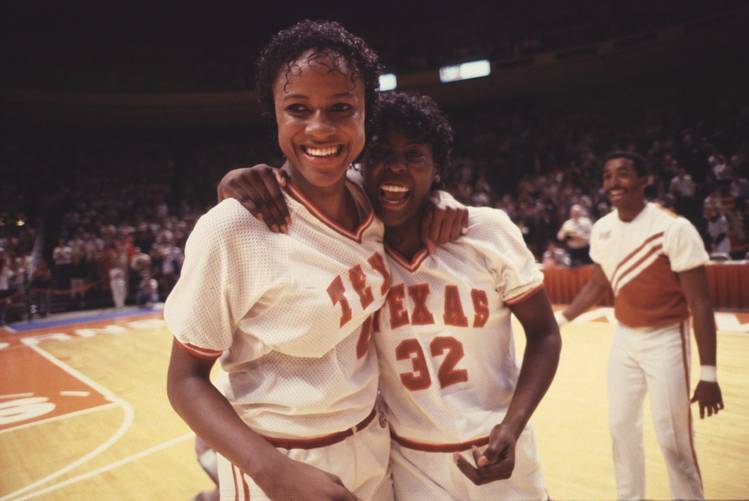 Clarissa Davis, seen here embracing former teammate CJ Jones, will have her No. 24 jersey retired by the Longhorns. (Texas Athletics)

Davis, who starred at Texas from 1985-89, will be honored before UT’s home game against Oklahoma State on March 8. Since Davis’ number is currently worn by senior forward Joyner Holmes, the jersey won’t be officially retired until after this season.

Davis is the second woman to have her number retired by Texas’ athletic department. In September, UT took Kamie Ethridge’s No. 33 out of the basketball program’s rotation.

The men’s basketball team at Texas has retired the numbers worn by Slater Martin, T.J. Ford and Kevin Durant.

Honoring one of the all-time greats. 🤘

Texas to celebrate the retirement the No. 24 jersey of Clarissa Davis on March 8.

During her time at Texas, Davis averaged a Texas-record 19.9 points and 8.7 rebounds per game. Overall, her 2,008 career points rank third in the school’s record books.  Davis won the Naismith Trophy in 1987 and 1989.

Texas compiled a 124-10 record with Davis on its roster.  Behind Davis’ 56-point, 32-rebound effort at the 1986 Final Four, the Longhorns won a national championship.

Texas holds onto No. 25 ranking in the Associated Press’ poll