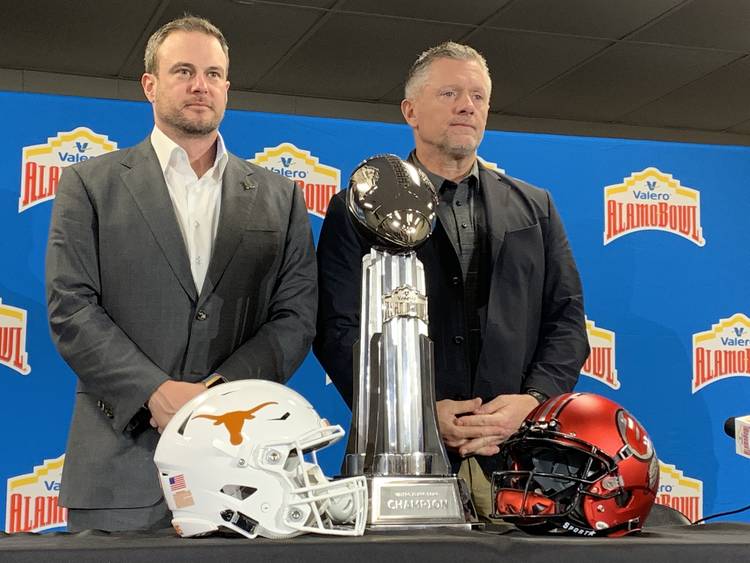 Texas coach Tom Herman and Utah's Kyle Whittingham pose with the Alamo Bowl trophy during the final press conference Monday, Dec. 30, 2019, before their teams face each other at the Alamodome. Brian Davis/American-Statesman Staff

SAN ANTONIO — Texas coach Tom Herman hit all the right notes in the final Alamo Bowl press conference Monday, thanking seniors for sticking with him while also showing excitement for the future.

Herman specially called out seniors Collin Johnson, Devin Duvernay and Brandon Jones for battling through injuries this season and deciding to play against No. 11 Utah.

The Longhorns are aiming for their first three-game bowl winning streak since the 2006-08 seasons on Tuesday in the Alamodome.

“There’s excitement. I’m excited. I know that,” Herman said while sitting next to Utah’s Kyle Whittingham. “I know this is going to be an important offseason for me as the head coach in terms of teaching our culture and our way of doing things to some of these new coaches. Haven’t had to do that in a long time.

“I’m excited for that challenge, too,” he added. “I’m excited to almost show off the way that we do things from a cultural standpoint and accountability standpoint. I’m excited to learn, too, especially from these two coordinators.”

Herman said both Yurcich and Ash have “unbelievable track records.” Yurcich had strong success in six seasons at Oklahoma State from 2013-18. Ash called defensive plays for Ohio State’s national championship run in 2014. Both are expected to get two-year contracts at UT.

“Philosophically, they’re very aligned with what I think Texas football should look like,” Herman said.

Monday’s press conference came one day after Texas announced the Yurcich hire. Herman said he interviewed “five to six guys with great résumés that have great jobs as well.”

Herman said earlier this month he wanted to turn play-calling duties over to someone else and go back to being a CEO-type of head coach. Herman has been calling plays since the start of the 2018 season when he took those duties away from Tim Beck.

“I mean, I couldn’t have dreamed of a better fit in terms of similarities, the way we believe in offensive football,” Herman said of Yurcich.

At least Herman knows who will be the triggerman. One day after quarterback Sam Ehlinger said he would seek input from the NFL draft advisory board, Herman said Ehlinger already had that information.

“But I do think he’s got a tremendous future at the next level,” Herman said. “Again, I’ll say it as many times as I need to. He sees the game as good as any I’ve coached.”

Whittingham did receive some questions at the joint press conference. He joked that he was glad to visit the Alamo, “which I knew nothing about.”

“I had all that backwards,” Whittingham said. “I learned a ton when I went on a private tour of the Alamo, got myself straightened out on that.”

Whittingham also praised the Utah seniors that have NFL aspirations. Herman said Johnson, Duvernay and Jones have all been invited to the NFL scouting combine; Whittingham let it slip that Utah has seven going, too.

“We’re excited as heck,” Herman said. “We’ve had some really good practices. We’re about as healthy as we’ve been.”

Vaughns, a redshirt freshmen, played in nine games and had 14 tackles. Gbenda had one tackle this season playing in four games, thereby earning a redshirt.

Mehringer hired at FAU: Former Texas outside receivers coach Drew Mehringer wasn’t a free agent long. Mehringer was hired as the co-offensive coordinator at Florida Atlantic, according to reports.

Herman fired Mehringer from his position as outside receivers coach at Texas on Dec. 1. It was part of the overall staff shake-up Herman made with both coordinators.

Texas holds onto No. 25 ranking in the Associated Press’ poll