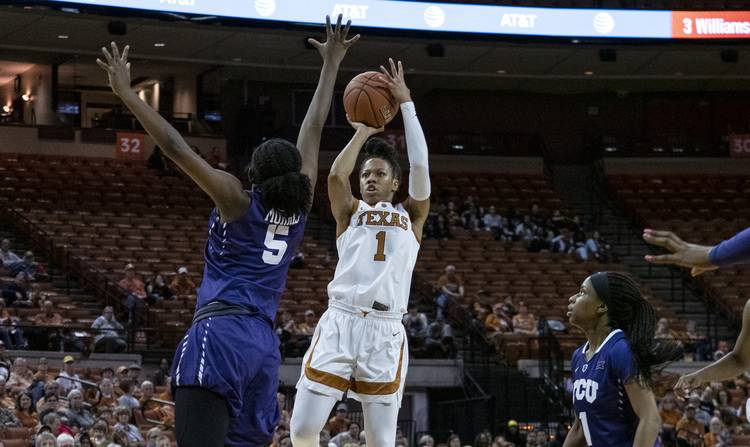 About the series: Texas leads 44-3

About the Longhorns: Texas has won its last four games. … Texas went 3-0 against TCU during the 2018-19 season. Two of the games were decided by a total of eight points. … Collier has recorded nine double-doubles this season. Nationally, that ranks behind only Auburn’s Unique Thompson (11) and Oklahoma State’s Natasha Mack (10). … Texas has won the rebounding battle in nine of its 12 games. … Five different players (Collier, Holmes, Sutton, Taylor and senior guard Lashann Higgs) have led Texas in scoring at least once this season.

About the Horned Frogs: Ray, who graduated from Austin’s Bowie High, ranks sixth in TCU’s history with her 354 career assists. She is 75 points away from becoming the 20th member of TCU’s 1,000-point club. … Sophomore forward Yummy Morris scored a career-high 16 points in a 82-70 loss at Middle Tennessee on Sunday. …  While at South Dakota during the 2017-18 season, Bradley ranked third in the Summit League with her 77 three-pointers. … Two of TCU’s all-time wins over Texas have come under Pebley.

LISTEN: Longhorns UnFiltered: Is Texas back after Alamo Bowl blowout of Utah?