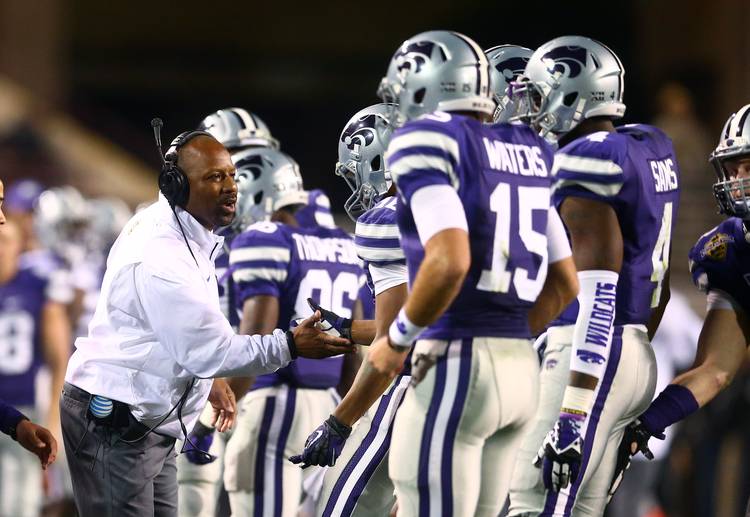 Texas coach Tom Herman continues to fill out the Longhorns’ coaching staff for 2020.

The university announced Monday that former Kansas State offensive coordinator Andre Coleman, who was an analyst at UT last season, will be the new receivers coach.

Also, Euless native and former Wisconsin standout Jay Valai has been named the new cornerbacks coach. He will work alongside new defensive coordinator Chris Ash, who has extensive knowledge coaching safeties and a personal history with Valai.

Details of their new contracts were not immediately known. Texas has started to shift non-coordinator assistants to one-year contracts with annual rollover possibilities.

Coleman, 48, has the tougher assignment of the two. Last season, Texas split the receivers into two position categories — inside receiver and outside receivers — and had two assistants.

But as Herman remakes the coaching staff, he is shifting one extra coach over to the defensive side, which means Coleman will oversee all receivers. He was named the interim receivers coach on Dec. 1 and worked with the position group leading up to the Alamo Bowl.

“He’s a veteran coach who is highly respected, but working with him every day last year gave us a chance to personally see his passion for the game and love for the players,” Herman said in a statement.

Before joining Texas, Coleman spent the previous six seasons at Kansas State, eventually becoming the Wildcats’ offensive coordinator in 2018. As a player, Coleman was an All-Big Eight standout in Manhattan and would eventually score on a dazzling 98-yard kickoff return in Super Bowl XXIX for San Diego.

Herman said Coleman “covers all the bases” with player development, recruiting and just an overall strong person to add to the coaching staff.

“We have a great group of guys in the receivers room,” Coleman said in a statement. “They’re hungry for knowledge, they want to learn and they want to get better. It’s a coach’s job to take kids to places they can’t get to by themselves. I’m looking forward to that challenge of bringing out the best in them and watching their success.”

Valai played at Colleyville Heritage in the Northeast Tarrant County area and ultimately signed with Wisconsin. In 2010, Valai was asked about the key to his success. “My mentality, very angry, little man syndrome. I go on the field and try to prove everybody wrong and my enthusiasm. That’s first and foremost,” Valai said at the time.

That’s the perfect mentality for cornerbacks, a group that usually lives on an island and must always keep looking forward to the next play.

Valai played all four years with the Badgers and helped the team win the 2010 Big Ten title. Ash was the team’s defensive backs coach that season.

Valai spent the 2018 season with the Kansas City Chiefs before Ash hired him at Rutgers to be a defensive quality control assistant. In a statement, Ash said, “Jay is a rising star in this profession.”

“He’s from the state of Texas, born and raised in the Dallas area, and I’m very excited to have him on board with us,” Ash said.

In a statement, Valai said he’s “beyond proud and blessed” to represent Texas.

“Growing up as a kid in Texas and watching Aaron Ross and Michael Huff and all these guys play, and being part of the culture that is Texas high school football, which is second to none, I’m just elated,” Valai said.

Herman has not announced his complete coaching staff yet, although he’s hired the two main components — Ash and offensive coordinator Mike Yurcich.

Offensive line coach Herb Hand, defensive line coach Oscar Giles and running backs coach Stan Drayton are the only three members of the 2019 staff that are expected to be retains. However, Drayton has fielded calls from NFL teams, including the Dallas Cowboys, about joining their staffs.

Following a disappointing finish to 2019, Texas to begin its 2020 campaign without a ranking